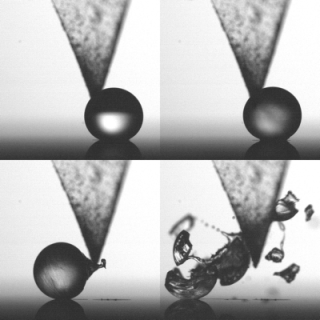 Water expands when it freezes, so scientists wondered what would happen if water was frozen from the outside in. Answer: It explodes.

The researchers filmed their water-droplet experiment, offering a slow-motion view of the exploding ice. When a droplet of water is frozen from the outside, it develops a rigid ice shell, according to the researchers. As the interior of the droplet begins to freeze, its expansion is restricted by the hard exterior, leading to the explosion.

The spherical drops were created in a vacuum chamber so the researchers could "supercool" the droplet, bringing the water to below 32 degrees Fahrenheit (0 degrees Celsius) without freezing it. Then, the researchers touched the droplet with silver iodide, which acts as a "seed" for ice crystals to form around. In this case, the supercooled water began to crystalize, freezing the outside of the droplet. An ice shell formed around the droplet, thickening from the outside in and building pressure within the droplet as the interior attempted to freeze. In the video, the droplet can then be seen cracking slightly and releasing some ice flakes, before finally exploding. [The Surprisingly Strange Physics of Water]

"The cracks and cavities are slowly healed by liquid water pushed out from the inside," the researchers explained in the video. "Once all the cracks are healed, pressure can build up again."

Based on different droplets' explosions, the researcher developed a mathematical model to predict how the droplets would react to being frozen from the outside in. They found that there is a minimum droplet size — below a diameter of about 50 microns — at which the droplet will not explode.

This is the same phenomenon that happens in clouds, the researchers said. Precipitation occurs when water droplets explode in the cold tops of clouds, transforming fluid droplets to ice.

Details of the water droplets' dynamics when frozen were published online Feb. 24 in the journal Physical Review Letters.