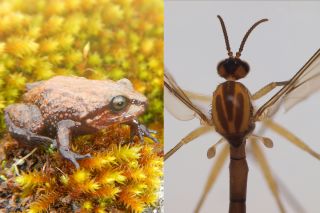 What does British naturalist and broadcaster Sir David Attenborough have in common with the Finnish founder of a symphonic metal band? Both recently inspired names for new species.

A newly described frog from Peru is the first amphibian named for Attenborough, who has already lent his name to various species of invertebrates, mammals, plants and reptiles, both living and extinct.

And a fungus gnat that lives in shadowy environments in the province of Lapland, Finland, is the first creature named for self-proclaimed "nature nerd" Tuomas Holopainen, musician and founding member of the band Nightwish, which combines head-banging heavy-metal music dynamics with classical instruments. [6 Spectacular Species Named for David Attenborough]

The species named for Attenborough, Pristimantis attenboroughi, will go by the common name Attenborough's rubber frog. Like others in its family, this fleshbelly frog does not have a tadpole stage. Researchers collected 34 specimens of the frog — 10 adult females, 11 adult males and three juveniles — in central Peru's Pui Pui Protected Forest at elevations between 11,155 feet and 12,913 feet (3,400 and 3,936 meters) above sea level.

The researchers found that the adult female frogs measured about 0.8 to 0.9 inches (19 to 23 millimeters) in length, and males were somewhat smaller — around 0.6 to 0.7 inches (15 to 19 mm). The adult frogs' coloration ranged from gray to green to red, whereas juveniles were lighter in color — yellowish or reddish brown — and patterned with darker spots and stripes. Scientists reported their findings in a new study, published today (March 7) in the journal ZooKeys.

Meanwhile, about 7,200 miles (11,600 kilometers) away in eastern Lapland, researchers were investigating a new species of fungus gnat, a type of tiny fly that inhabits and breeds in soil, and feeds on fungi.

Scientists found the gnat, which they named Sciophila holopaineni, in the Törmäoja conservation area in Savukoski, Finland, and described the newly discovered insect in a study published March 6 in the Biodiversity Data Journal. S. holopaineni's Finnish common name — "tuomaanvarjokainen" — further references Nightwish, referring to the band's latest album, "Endless Forms Most Beautiful," which touches on themes of biodiversity and evolution.

"I am very, very touched," Holopainen said in a statement, after he was asked to lend his name to the tiny insect. "This is the highest honor a nature nerd like me can receive."

Attenborough, of course, has received this honor multiple times. Before P. attenboroughi, his most recent namesake was the extinct marsupial mini-lion Microleo attenboroughi, which was described in July 2016 in the journal Palaeontologia Electronica.

2016 also marked a naming first forAttenborough: A research vessel destined to explore polar oceans was dubbed the "Sir David Attenborough" on May 6, shortly before his 90th birthday. However, although Attenborough's name is usually a first pick for researchers, in this case, his moniker was chosen to replace another name that was the overwhelming favorite in an internet poll — the somewhat less dignified "Boaty McBoatface."