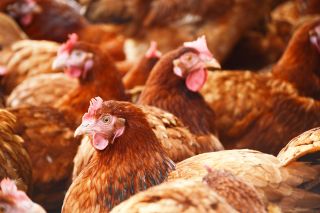 A particularly deadly strain of avian flu, currently found in China, has infected more people there this flu season than it has in any season since the virus was identified, a new report finds.

From October 2016 to February 2017, 460 people were reported infected with the H7N9 virus, according to the report, which was published today (March 3) by the U.S. Centers for Disease Control and Prevention (CDC). This season is considered to be the fifth annual epidemic of the virus, which was first identified in early 2013.

During those first four epidemics, 88 percent of the people who were infected with the H7N9 strain developed pneumonia, and 68 percent were admitted to the intensive care unit, according to the report. Forty-one percent of the patients died, the researchers found.

Indeed, the CDC says that most of the reported cases of the H7N9 virus have resulted in "very serious illness," though there have been a small number of milder cases reported.

Symptoms of the viral infection start with a high fever and cough, according to the CDC. In many cases, the illness progresses, and people can develop severe pneumonia, fluid in the lungs, septic shock and multiorgan failure, which can lead to death, the CDC says.

In the new report, the researchers noted that most of the infected people contracted the virus through contact with infected poultry. Although there have been several instances in which the virus hopped from one person to another, this "human-to-human spread" has been limited, as in, spreading from a sick person to someone in very close contact with that person, such as a caretaker.

For a virus to become pandemic, "sustained" human-to-human spread is necessary, the CDC says. In other words, a pandemic virus must be able to spread from one person to another, and then to another, and so on. The H7N9 virus is not currently spreading that way, although it is possible that the virus could mutate in a way that would give it the ability to spread easily from person to person, according to the CDC. Health officials are closely monitoring the virus for any of these changes, the CDC says.

The H7N9 virus has not been detected in humans or birds in the U.S., and therefore, the current risk to people in the U.S. is "considered to be very low," according to the CDC. However, CDC noted that it is possible that the virus could spread in the U.S., most likely via a traveler from China.