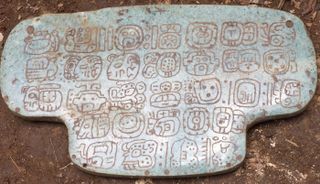 This jade pendant, which may have once belonged to an ancient Maya king, is inscribed with 30 hieroglyphs.
(Image: © G. Braswell/UC San Diego)

More than a thousand years ago, the Maya couldn't dream up geoengineering schemes that would ease their climate woes. So perhaps some of them turned to the gods in a last-ditch plea for rain.

That might explain a royal "wind jewel," carved with hieroglyphs, that archaeologists recently found at a Maya settlement in southern Belize.

The artifact was uncovered in a tomb at Nim Li Punit, a hilltop site inhabited between A.D. 150 and 850, its civilization peaking just before the collapse of the Classic Maya period. Nim Li Punit means "the hat is big" in the Q'eqchi' Mayan language, in reference to the big headdress worn by a Maya leader on one of the several carved blocks known as stelae found at the site. [In Photos: Ancient Maya Carvings Exposed in Guatemala]

Geoffrey Braswell, an archaeologist at UC San Diego, led excavations at Nim Li Punit in 2015. His team uncovered a tomb that dates back to around A.D. 800-830 and contained ceramic vessels, including a vase depicting a beaked Maya god of wind, music and trade. The researchers also found shells, obsidian blades, beads, two human teeth and a set of limestone bars that might have been used for ritual musical performances. (To find out whether these bars were really some kind of rudimentary xylophone, the researchers still have to test whether the stones have any kind of tonal sequence.)

The most important artifact from the tomb was a large T-shaped jade pendant. Braswell has called this object the "wind jewel" because it is shaped like the Maya glyph ik', which means "wind" or "breath," and there is also a carved ik' glyph on the front of the pendant.

By the time it was buried, the pendant was already 150 years old. The hieroglyphs carved into the backside of the jewel say it was first used in A.D. 672 in an incense-scattering ceremony, made for the king Janaab' Ohl K’inich. Based on the names of the king’s parents (which were also carved into the pendant) Braswell and his colleagues suspect this ruler probably came from northern Belize or from eastern Petén. There is separate evidence that the pendant was used in such ceremonies at Nim Li Punit, too: Two other images, dated to A.D. 721 and 731, carved into the rock slabs at the site show a king wearing a T-shaped pendant as he scatters incense, the researchers said.

Braswell said that the king of Nim li Punit perhaps had to wear a special pendant during the incense-scattering ceremonies that were thought to bring on the wind and rain. "This identified them with the god of music and the winds that brought the monsoon rains, making agriculture possible," he wrote in a forthcoming paper about the excavation in the Journal of Field Archaeology.

The researchers, who are still working on deciphering the hieroglyphs, suspect the pendant ultimately may have been buried as a dedication in desperate times.

"A recent theory is that climate change caused droughts that led to the widespread failure of agriculture and the collapse of Maya civilization," Braswell said in a statement. "The dedication of this tomb at that time of crisis to the wind god who brings the annual rains lends support to this theory, and should remind us all about the danger of climate change."

The pendant is also described in a recent paper in the journal Ancient Mesoamerica by Braswell and Christian Prager, of the University of Bonn.