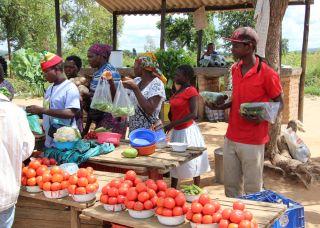 The Shona are a people whose ancestors built great stone cities in southern Africa over a thousand years ago. Today, more than 10 million Shona people live around the world. The vast majority live in Zimbabwe, and sizeable Shona populations are also located in South Africa, Botswana, Zambia and Mozambique.

The Shona have their own language, which the Penn Language Center estimates is spoken by about 75 percent of the population of Zimbabwe. The center notes that the language has multiple dialects and sub-dialects. The Shona work in a variety of occupations, and their artists are well known for their finely carved wooden headrests and stone sculptures.

Traditional Shona religion recognizes the god Mwari "as the creator and sustainer of the universe," wrote Takawira Kazembe, a lecturer at the University of Zimbabwe, in two ethnographic studies published in 2009 and 2010 in the Rose+Croix journal. In the two studies, Kazembe conducted interviews with those who practice traditional Shona religion in Zimbabwe and also witnessed a number of traditional ceremonies and practices.

Kazembe's studies revealed that traditional Shona religion is very complex and is often misunderstood by Westerners. While the Shona believe that they can communicate with the spirits of their ancestors, they do not worship them but ask their dead ancestors to convey petitions to Mwari on their behalf. "People consider themselves as so low as to be unworthy of talking or interacting directly with the Divine. They rely on the mediation of the spirits," wrote Kazembe.

Kazembe found that in order to commune with the spirits of their ancestors, as well as with non-human spirits, the Shona rely on spirit mediums who the spirits can possess.

This process of spirit possession and communication can be complicated. "Different spirits may compete to possess one medium, and each such spirit may have its own pantheon of mashave spirits," wrote Kazembe. "Mashave are not spirits of dead people. No one knows their origin. They are believed to have been created for a purpose," wrote Kazembe.

"Mashave are divided into good and bad," Kazembe added, noting that good mashave spirits can do positive things such as help people recover from illness or injury while the bad mashave spirits will cause evil deeds and "are thought of as demons."

If a person died violently, and restitution has not been paid to their survivors, the spirit of the person who died violently may come back as "N'gozi," a word that Kazembe translates as "spirit of vengeance."

"The spirits of all these hound paternal relatives left behind by the perpetrators," Kazembe wrote. "Many are reported to have been devoured by deaths related to these avenging spirits."

In order to stop these avenging spirits Kazembe said that they must be appeased by having all surviving family members on both the victims side and the perpetrators side come together and agree to compensation.

"These have to unite and appease the spirits of the victims," Kazembe wrote. "If the appeasement is tried without the involvement of some of the members of the extended family, problems with the avenging spirit will not cease."

Kazembe explained that the Shona's traditional system of justice does not use incarceration but rather compensation. "All committed crimes must be compensated against before the soul joins the ancestral spirits," wrote Kazembe. "It does not matter whether the perpetrator was jailed or not, restitution must be effected since the victim does not benefit from the imprisonment of the perpetrator."

"Traditional medical practices have succeeded in curing a large number of illnesses using both scientific and non-scientific, or subjective, knowledge," wrote Kazembe.

"Scientific medicines are obtained from plants. Plant medicines recommended by traditional healers have been developed through trial and error, experimentation and systematic observation over a long period of time," wrote Kazembe, who noted that Shona traditional healers believe that the effectiveness of these medicines can be enhanced by the use of the spirits.

"The major source of non-scientific knowledge are the various spirits — mashave, in particular — which are believed to be capable of enhancing even the efficacy of herbal medicines," wrote Kazembe who added that healers sometimes refer patients to spirit mediums to help them contact spirits capable of helping them.

Daneel found in his studies that Shona Christians like to hold services outdoors, and these services can have up to 50,000 people worshipping at one time. He also found that the Shona sometimes like to be baptized by being immersed in the waters of a river although, if they convert during the dry season, they'll sometimes use a pool containing a mix of water and mud.

The ancestors of the Shona are believed to have helped found Great Zimbabwe, an 800-hectare (1,977 acres) city that flourished between the 11thand 15th centuries A.D. Recognized as a UNESCO World Heritage Site, Great Zimbabwe was a center for trade, and archaeologists have found artifacts from as far away as China in the city.

Explorers from Portugal appeared on the coast of east Africa at the end of the 15th century and over the next few centuries a mix of European traders, missionaries and colonists all vied for influence in the area.

Zimbabwe (then called Rhodesia) was under British control in the time after World War II and in the 1960s and 1970s a series of wars were fought between European colonists and the indigenous people of the region (including the Shona) for control of Zimbabwe. Daneel documented this conflict in his photographs, showing spirit mediums warning of air raids and helping fighters communicate with the spirits of their ancestors.

In 1979, the war ended in defeat for the European settlers and Zimbabwe became fully independent in 1980. Recently the country has been hit by political and economic problems that caused Zimbabwe's currency to suffer from hyperinflation and the currency has lost all value.