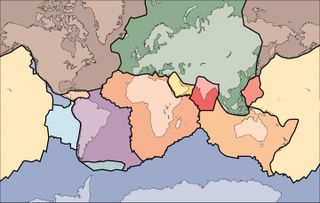 The outer layer of modern Earth is a collection of interlocking rigid plates, as seen in this illustration. But new research suggests that plate tectonics did not begin until much later in Earth's history.
(Image: © USGS)

Earth's outer layer may have once been a solid shell before it was broken up into huge tectonic plates that move around and trigger extreme events like earthquakes and volcanic eruptions, scientists have found.

The history of Earth's outer shell has long been the subject of debate in the scientific community. Some scientists held a theory, known as uniformitarianism, that tectonic plates began early in the planet's history. Others, however, theorized that a solid shell originally covered Earth before it eventually fractured into the tectonic plates that are seen today.

Now, a team of scientists has found that the solid-shell model is the most likely explanation of how Earth's outer layer began. [50 Interesting Facts About Earth]

The new study finds support for the idea that the Earth's crust as "a 'stagnant lid' forming the planet's outer shell early in Earth's history" is a likely model, study co-author Michael Brown, a professor of geology at the University of Maryland, said in a statement.

To investigate the history of Earth's outer shell, Brown and his colleagues studied the planet's ancient rocks, specifically from a large area of ancient crust in western Australia. These rocks range from 2.5 billion to 3.5 billion years old (the Earth is about 4.6 billion years old). The researchers also studied rocks related to volcanic activity, which occurs at the borders of tectonic plates as they interact with one another.

The ancient crust's Pilbara granite rocks have a chemical composition similar to Coucal basalt rocks in the region, which are produced during volcanic activity or from molten basalt erupting on the ocean floor, the researchers found. The scientists looked into whether the ancient basalt could have created the granite without a volcanic source, therefore forming the crust without plate tectonic activity.

Using the Coucal basalts and Pilbara granites from the ancient crust, the scientists created experimental models, which they used to replicate how the Earth's outer layer could have formed without plate tectonics.

Based on the rocks' phase equilibria — which describes the rocks' behavior under different temperatures and pressure conditions — the researchers found that the basalts could have formed the Pilbara granites in a so-called "stagnant lid" scenario. The scientists found that the pressure and temperature of a single shell covering the planet would have stimulated the melting of basalts to form granites, according to the study.

The research is detailed in a study published online today (Feb. 27) in the journal Nature.