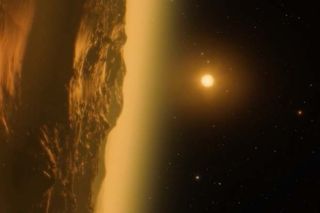 Traveling to TRAPPIST-1: How Long Would It Take? | Video
(Image: © ESO/L. Calçada/spaceengine.org)

The discovery of seven Earth-size planets around a nearby star, TRAPPIST-1, is certainly exciting news. But what would it take to visit one of these potentially Earth-like alien worlds?

TRAPPIST-1 is 39 light-years away from Earth, or about 229 trillion miles (369 trillion kilometers). It would take 39 years to get there traveling at the speed of light. But no spacecraft ever built can travel anywhere near that fast.

That said, people have sent some pretty fast vehicles into outer space. With today's technology, how long would it take to get to TRAPPIST-1?

New Horizons, the fastest spacecraft ever launched, flew past Pluto in 2015 and is currently traveling out of the solar system at 14.31 kilometers per second, or about 32,000 mph, according to NASA's New Horizons tracking page. At this rate, it would take the Pluto probe about 817,000 years to reach TRAPPIST-1.

NASA's Juno spacecraft actually flew faster than New Horizons during its approach to the gas giant Jupiter in 2016. With the help of Jupiter's gravity, Juno hit a top speed of about 165,000 mph (265,000 km/h) relative to Earth, making it the fastest human-made object ever (though New Horizons' initial speed was faster than Juno's speed after launch).

Even if Juno were constantly traveling that fast — not just getting a speed boost en route — it would take the spacecraft 159,000 years to reach TRAPPIST-1.

Voyager 1, Earth's most distant spacecraft, left the solar system and entered interstellar space in 2012. According to NASA, it is currently speeding away at 38,200 mph. For Voyager 1 to get to TRAPPIST-1, it would take the spacecraft 685,000 years.

NASA's space shuttle traveled around the Earth at a maximum speed of about 17,500 mph (28,160 km/h). A spaceship traveling at this speed would take around 1.5 million years to get to TRAPPIST-1.

So for a human mission to the TRAPPIST-1 solar system, the space shuttle would not be a practical mode of transportation.

One ultrafast spacecraft that could reach TRAPPIST-1 in a much shorter time span is an interstellar mission dreamed up by Stephen Hawking in his Breakthrough Starshot initiative.

Hawking's tiny, laser-propelled probes could theoretically fly as fast as 20 percent of the speed of light, or 134 million mph (216 million km/h). That's about 4,000 times faster than NASA's record-breaking New Horizons spacecraft! A spacecraft that fast could reach TRAPPIST-1 in less than 200 years. But that concept has yet to leave the ground.

With today's technology, there's no way that anyone alive right now could make it to TRAPPIST-1 in a lifetime. While discussing the new discovery at a news conference today (Feb. 22), NASA officials suggested that it would likely take at least 800,000 years to reach the TRAPPIST-1 system.