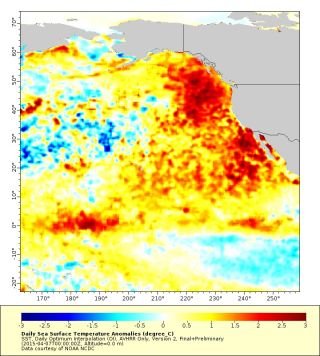 The "warm blob," seen in April 2015, squished up against the West Coast. The scale bar is in degrees Celsius (each increment is 1.8 degrees Fahrenheit).
(Image: © NOAA National Climate Data Center)

A warm blob of water lurking in the Pacific Ocean in 2014 and 2015 led to a spike in ozone levels across the western U.S., new research suggests.

The blob of warm water, which sat about 310 miles (500 kilometers) off the Oregon coast, was linked to a high-pressure system in the atmosphere that resulted in warm, calm air and sunny skies across nearly a quarter of the country, said study co-author Dan Jaffe, an atmospheric scientist at the University of Washington Bothell.

The finding suggests that these ocean patterns don't just mess with sea life; their effects may also reach far inland, he said. [The World's 10 Most Polluted Places]

The "blob" ― as meteorologists affectionately called the mass of warm water ― occurred from the winter of 2014 through the summer of 2015, when high sea-surface temperatures prevailed in the Northeast Pacific Ocean. The warmer waters — about 2 to 7 degrees Fahrenheit (1 to 4 degrees Celsius) higher than average for the region — spanned from the coast of Sitka, Alaska, to Santa Barbara, California, and came with a high-pressure system in the atmosphere that led to low wind speeds, fewer storms and sunnier skies.

The warm blob scrambled the food chain and brought a host of strange ecological effects: The toastier waters fueled some of the worst-ever toxic red tide algal blooms, and marine mammals died in droves as they struggled to find enough food in normally cold, food-rich waters, Jaffe said.

But the blob also had stark effects inland. In June 2015, for instance, the average monthly air temperatures were elevated between 1.8 and 10.8 F (1 and 6 C) relative to normal in the western U.S., researchers reported Wednesday (Feb. 15) in the journal Geophysical Research Letters. These regions also experienced more cloud-free, windless days.

Jaffe and his colleagues had been tracking levels of ozone, a compound with three atoms of oxygen that can irritate the lungs, at the Mount Bachelor Observatory in central Oregon.

"When you looked at where the highest temperatures were and the unusual highest ozone levels were, you see an unusually good match," Jaffe told Live Science.

That made the team suspect the blob may have fueled the ozone levels. Ozone forms when hydrocarbons and nitrogen oxides, which are emitted as pollutants from cars, undergo a complicated chemical reaction with sunlight in the atmosphere. Both sunlight and high temperatures fuel faster ozone-formation, whereas the wind blows away the basic building-block pollutants, making it harder to form ozone, Jaffe said.

When they investigated ozone levels throughout the West, they found areas with the hottest, most stagnant air also had highly elevated ozone levels, compared with historical averages. For instance, Salt Lake City and Sacramento, California, had unusually high levels, likely a combination of having high emissions of the base pollutants, as well as the optimal conditions for forming ozone, Jaffe said.

The new findings suggest the blob directly led to dangerous levels of ozone across the western U.S.

What's not known, however, is whether climate change will lead to more of these blobby weather patterns.

"We know it's getting warmer, and the question becomes how will ozone change in the future?" Jaffe said.