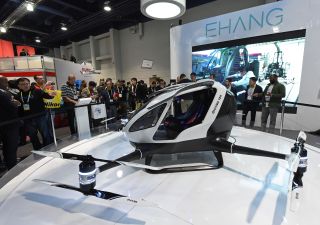 Commercial drones just got a big upgrade: A fleet of passenger-carrying quadcopters could be flying around the city of Dubai by this summer, according to news reports.

The city's new transportation option is an egg-shaped, single-passenger drone in the traditional quadcopter style seen in many commercial drones, the Associated Press reported. The Chinese-made Ehang 184 can carry one passenger weighing up to 220 lbs. (100 kilograms) and a small suitcase, according to the AP.

Mattar Al Tayer, head of Dubai's Roads and Transport Authority, said during the World Government Summit this week that the city plans to have the drone regularly traversing the city's skies in July. [Hyperloop, Jetpacks & More: 9 Futuristic Transit Ideas]

"This is not only a model," Al Tayer told the AP. "We have actually experimented with this vehicle flying in Dubai's skies."

The drone was unveiled in a flight over Dubai's Burj Al Arab, the sail-shaped luxury hotel that is the fourth-tallest hotel in the world, the AP reported.

Once the passenger is buckled in and selects a destination, the drone automatically flies off. A control room will monitor the drones remotely via 4G mobile internet, according to the AP. With a battery that lasts for up to 30 minutes of flight and a range of up to about 30 miles (50 kilometers), the passenger-carrying drone can offer commuters an alternative to Dubai's notorious traffic. Though the drone can reach up to 100 mph (160 km/h), authorities said the drone's average operating speed will be about 60 mph (100 km/h), the AP reported.

Passenger-carrying drones are just the latest step in Dubai's vision for a technologically advanced transportation future. In April, the AP reported about United Arab Emirates Vice President and Prime Minister Sheikh Mohammed bin Rashid Al Maktoum's announcement that 25 percent of Dubai's commuters will be carried by driverless vehicles in 2030.

Following up on that claim, the city agreed to study the potential implementation of a "Hyperloop," a transportation system first envisioned by SpaceX and Tesla founder Elon Musk, according to the AP. In theory, the Hyperloop would move levitating pods through low-friction pipes to transport people at speeds as fast as 760 mph (1,220 km/h). For this project, Dubai partnered with Los Angeles-based Hyperloop One, which is not affiliated with Musk or his companies, to assess the possiblity of using a Hyperloop system to connect Dubai with Abu Dhabi.