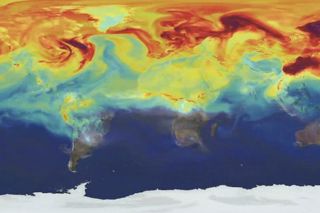 An animation showing how carbon dioxide moves around the planet.
(Image: © NASA/YouTube)

A group of coders is racing to save the government's climate science data.

On Saturday (Feb. 11), 200 programmers crammed themselves into the Doe Library at the University of California, Berkeley, furiously downloading NASA's Earth science data in a hackathon, Wired reported.  The group's goal: rescue data that may be deleted or hidden under President Donald Trump's administration.

The process involves developing web-crawler scripts to trawl the internet, finding federal data and patching it together into coherent data sets. The hackers are also keeping track of data as it disappears; for instance, the Global Data Center's reports and one of NASA's atmospheric carbon dioxide (CO2) data sets has already been removed from the web.

By the end of Saturday, when the hackathon concluded, the coders had successfully downloaded thousands of pages — essentially all of NASA's climate data — onto the Internet Archive, a digital library.

But there is still more to be done. While the climate data may be safe for now, many other data sets out there could be lost, such as National Parks Service data on GPS boundaries and species tallies, Wired reported.

"Climate change data is just the tip of the iceberg," Eric Kansa, an anthropologist who manages archaeological data archiving for the nonprofit group Open Context, told Wired. "There are a huge number of other data sets being threatened [that are rich] with cultural, historical, sociological information."