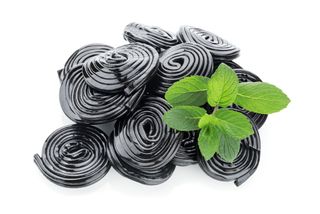 Too much black licorice during pregnancy could affect a baby's brain, a new study from Finland finds.

"The present findings suggest that pregnant women should be informed that consumption of licorice and other food products containing [a chemical found in licorice called] glycyrrhizin may be associated with harm for their developing offspring," the researchers wrote in the study, which was led by Katri Räikkönen, a professor of psychology at the University of Helsinki in Finland.

However, a number of health organizations, including the U.S. Food and Drug Administration and the World Health Organization, do not warn against licorice or glycyrrhizin intake during pregnancy, the researchers said. But in 2016, the National Institute for Health and Welfare in Finland added licorice to the "not recommended" category for pregnant women.

The licorice compound glycyrrhizin may explain the effects observed in the study.

In the body, glycyrrhizin blocks the activity of an enzyme that helps protect the fetus from high levels of cortisol, which is sometimes referred to as the stress hormone. High levels of cortisol may affect the neurological development of a fetus, the researchers wrote.

The researchers noted, however, that they could not determine in the study a specific cut-off amount for how much licorice is safe for a pregnant woman to eat, or if there was a specific time during pregnancy that women should avoid the candy.

In addition, the researchers cautioned that licorice may not be the only factor in the study that affected development. It's possible that other, unmeasured factors may have played a role, they said.