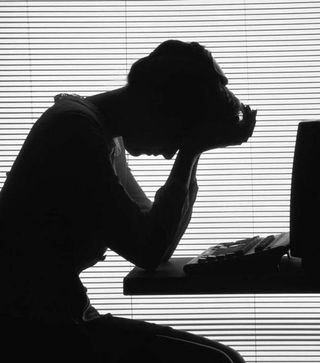 People with symptoms of depression may see temporary improvements to their mood by following the age-old advice to sit up straight, a new study from New Zealand suggests.

However, the researchers cautioned that the findings are preliminary; it's not yet known whether an upright posture could actually aid in treating depression, or if the effects last over the long term, they said.

"Changing posture is a simple, highly acceptable and low-risk intervention that could be applied either by itself or alongside other treatments," the researchers, from The University of Auckland, wrote in their paper, which will be published in the March 2017 issue of the Journal of Behavior Therapy and Experimental Psychiatry. "However, more research is required to corroborate these findings, especially in clinical settings" outside of a laboratory, they said.

Previous studies have found that stooped posture is a feature of depression, the researchers said. In addition, other studies have shown that adopting an upright posture improves mood and self-esteem in people without depression, but few studies have looked at how changes to posture affect people with depression. [Posture Pointers: 7 Tips for Breaking Bad Habits]

The study involved 61 people whose scores on a survey indicated that they had mild to moderate symptoms of depression. (These participants were not necessarily diagnosed with depression by a doctor.) The researchers excluded people who were already being treated for depression and those who had symptoms of severe depression.

All of the participants were told that the aim of the study was to examine the effects of sports tape on their thinking abilities. The researchers told the participants this fake premise to reduce the chances that the participants would experience a placebo effect, or a result of people's expectation that a treatment would work, rather than an effect of the treatment itself.

At the start of the study, overall, the participants tended to have a more stooped posture, compared with a separate sample of people without symptoms of depression who participated in an earlier study.

Next, the researchers wanted to see whether adopting an upright posture might help people's mood in stressful situations. So they had the participants undergo a stress test, which involved giving a speech in front of a panel of examiners. The participants were given just 3 minutes to prepare their speech. Afterward, the examiners asked the participants to perform a complicated mental arithmetic task. [7 Ways Depression Differs in Men and Women]

However, the study did find that the people in the upright-posture group spoke more words during their speech, and used the word "I" fewer times, compared with the people in the regular-posture group. Previous studies have found that people with depression use the word "I" more often, which may reflect increased self-focus, and also have shorter utterances and more pauses in speech, compared with people without depression, the researchers said.

The new findings suggest that upright posture may lessen self-focus in people with depression, as well as reduce pauses in speech and short utterances, they said.