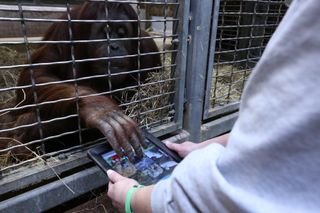 Think of it like online dating, but for primates: A Dutch zoo is using a series of photographs on a screen to help one orangutan kick off the mating process.

Breeding programs often involve international partnerships and long-distance travel of potential mates, so the Apenheul primate park in Apeldoorn, Netherlands, recently launched a four-year experiment dubbed "Tinder for orangutans." Rather than hope for the best once a male arrives at the zoo, researchers are first presenting pictures of the potential mates to a female orangutan to see how she reacts.

"Often, animals have to be taken back to the zoo they came from without mating," Thomas Bionda, a behavioural biologist at the zoo, told Dutch broadcaster NOS. "Things don’t always go well when a male and a female first meet." [Animal Sex: 7 Tales of Naughty Acts in the Wild]

Beyond hopefully increasing the chances of a successful match, the researchers will study how female orangutans make their mating choices. Bionda said the research is part of a broader program to better understand the role of emotions in animal relationships.

At Apenheul, an 11-year-old female orangutan named Samboja will be shown photos of male orangutans on a touchscreen tablet. The researchers hope that Samboja will respond strongly to one of the photos, signaling her preferred mate.

However, it's not as simple as asking Samboja to swipe right or left. The orangutan's responses are less gentle, and the first tablet successfully tested was reinforced with a steel frame, Evy van Berlo, an evolutionary psychologist, told local paper Tubantia.

Once the researchers have a strong enough screen, Bionda told NOS that the scientists can investigate whether Samboja's response to a male's appearance is enough to build attraction and lead to successful mating between the animals.

"This is completely digital, of course," Bionda said. “Usually, smell plays an important role too. But with the orangutans, it will be what you see is what you get."