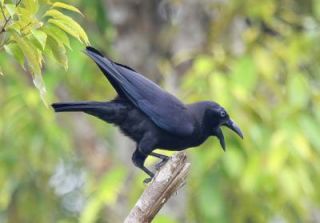 Corvus unicolor, the long-lost Banggai Crow, was rediscovered on Indonesia's Peleng Island. Confirmation of the rediscovery was made on 0ct. 13, 2009.
(Image: © Philippe Verbelen)

The all-black Banggai Crow (Corvus unicolor), known to science only by two specimens described in 1900, was found again by Indonesian biologists on Peleng Island, off the east coast of Sulawesi, Indonesia, in 2007. Pamela Rasmussen, a Michigan State University zoologist verified the finding.

Rasmussen studied the two century-old specimens, housed at the American Museum of Natural History in New York, and compared them to the new specimens to make sure they were not just members of a different all-black subspecies of crow, the more common Slender-billed Crow (Corvus enca).

"The morphometric analysis I did shows that all four unicolor specimens are very similar to each other, and distinctly different from enca specimens. We also showed that the two taxa differ in eye color — an important feature in Corvus," Rasmussen said. "Not only did this confirm the identity of the new specimens but also the specific distinctness of Corvus unicolor, which has long been in doubt."

The new specimens are now catalogued at the Museum Zoologicum Bogoriense on the Indonesian island of Java.

Since the specimens were gathered, other birdwatchers in the mountains of Peleng have photographed and recorded Banggai Crows, which Rasmussen said also confirms the distinctiveness of the species.

A photo of the Banggai Crow appears this week in the "Handbook of the Birds of the World."

Mochamad Indrawan of the University of Indonesia, who spearheaded the rediscovery, is now focusing on preserving the rare species, which is hunted by local residents. That includes making recommendations for protection of its forest habitat through sustainable agriculture methods and, perhaps, eco-tourism, to address the residents' livelihood needs.