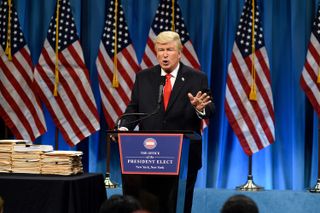 As the inauguration of Donald Trump as the 45th president of the United States approaches, actor Alec Baldwin said he plans to spoof the incoming president as much as he can.

"I'm gonna do ['Saturday Night Live'] as much as I can," Baldwin told ABC News, "and there's discussions about other venues we might pursue to further express our gratitude and admiration for the Trump administration."

Meanwhile, Trump himself has been regularly railing against Baldwin's performances on Twitter.

"@NBCNews is bad but Saturday Night Live is the worst of NBC. Not funny, cast is terrible, always a complete hit job. Really bad television!" the president-elect tweeted on Jan. 15.

Impersonations of politicians are now as de rigueur in politics as talking-head pundits and Gallup polling. Comic Tina Fey won an Emmy for her portrayal of then vice-presidential candidate Sarah Palin on "Saturday Night Live." And Palin, for her part, actually appeared alongside Fey in one episode, and presidential candidate John McCain appeared alongside his impersonator.)

Because the "SNL" impressions are so common, they're easy to take for granted. But impersonations are an understudied phenomenon, researchers have said — both in terms of how humans pull them off and how they're interpreted in the end.

"I haven't tested it, and I don't think anyone has," said Erik Bucy, a communications researcher at Texas Tech University who has studied political body language. "But I think there's a good case to be made that at least in the American television context, this really does improve the image of these public figures much more than it hurts them." [The 6 Strangest Presidential Elections in US History]

Humans are naturals at mimicry. Even in their first days of life, newborns cry in patterns that match the melodies of their native tongues, according to 2009 research. People couldn't learn language without the ability to listen to other people speaking and then contorting their own vocal tracts to make those same sounds, said Carolyn McGettigan, a neuroscientist who studies vocal learning at Royal Holloway, University of London.

McGettigan is one of the few researchers who has examined how people manage, on a neurological level, to do impersonations. She and her colleagues asked participants to either put on fake accents or to impersonate a specific person, like a celebrity or a friend. As the participants did these voluntary alterations in their voices, the researchers used  functional magnetic resonance imaging (fMRI) to determine which areas of their brains became more active.

Compared to speaking in a regular voice, altering one's voice was linked to more activation in the left inferior frontal gyrus and the insula, two brain regions known to be involved in speech production. Trying to imitate a specific person versus doing a more general fake accent lit up part of the temporal lobe in the right hemisphere of the brain, McGettigan and her colleagues reported in the Journal of Cognition in 2013.

This region, McGettigan said, has been previously reported to be active when people are listening to voices.

"It may reflect, to some extent, them imagining that specific vocal target to generate that impression," McGettigan told Live Science. In other words, a person trying to imitate Sean Connery first has to imagine the actor's gravelly brogue.

McGettigan's study suggests that perhaps Baldwin has Trump in his head while performing his sketches skewering the president-elect. What isn't clear is whether Baldwin, as an experienced actor, operates any differently than anyone trying on a Trump impression at a bar.

In another study, McGettigan and her colleagues scanned the brains of a few professional impersonators, but the researchers haven't been able to test enough experts to determine if people who are good at impressions are different, neurally speaking, than those who aren't as convincing. [Top 10 Mysteries of the Mind]

There's more to an impression than vocal mimicry, of course. Trump, like any politician, has a repertoire of gestural tics that Baldwin draws on, Bucy said. One, a pinched-finger hand gesture was dubbed "The Cobra" by some observers. Trump also extends a pointed index finger quite frequently, a gesture Baldwin deploys, along with protruding lips and squinted eyes.

But what's the ultimate effect of pulling it off? Bucy said he isn't convinced that a satirical impersonation is as devastating as political opponents of the target might hope. Impressions by a charming celebrity might pass on some of that charm to the politician, Bucy said.

"When Alec Baldwin cruises around stage in a mockery of that second presidential debate and they play the 'Jaws' music, suddenly it's fun to think of Trump's intimidation tactics," he said.

In a recent podcast, science communicator Malcolm Gladwell made a similar point, calling SNL's parody of Sarah Palin "comedy done without any courage at all." Gladwell pointed to research by Heather LaMarre of Temple University in Philadelphia that showed that conservatives found the over-the-top rightwing persona of comedian Stephen Colbert as just as funny as liberals did — but while liberals thought Colbert was skewering conservatives, conservatives thought the comedian was skewering liberals. The natural ambiguity of comedy, LaMarre told Gladwell, allowed people to see what they wanted to see in Colbert's character.

No one's studied whether that's true of impersonations like Baldwin's of Trump or Fey's of Palin, Bucy said. However, he said, humorous takes on a politician may indeed soften public opinion.

"I think it would be pretty easy to show that it helps with Trump's public image," Bucy said.