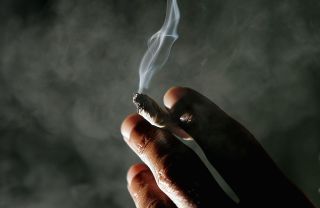 Older Americans are among the fastest growing groups of pot users, according to recent research and drug surveys.

For example, data from the Centers for Disease Control and Prevention (CDC) shows that from 2002 to 2014, marijuana use among those 55 to 64 years old rose from 1.1 percent of the population to 6.1 percent, a 455 percent increase. (For comparison, usage rates among 18- to 25-year-olds rose 13 percent over the same period.)

In a new review of relevant research, scientists attempted to understand the reasons behind this trend, and called for more public health studies on pot use among seniors. [Where Americans Smoke and Grow Marijuana (Infographic)]

Some have attributed the rise in marijuana use among older adults to pot-tolerant baby boomers getting older. The National Survey of Drug Use and Health indeed found that people who started using marijuana before age 30 made up half of all those over age 50 who said they had used marijuana recently. But the aging of baby boomers isn't the only factor at play, according to the new paper, published Wednesday (Jan. 11) in The Gerontologist journal.

Brian Kaskie, a professor at the University of Iowa College of Public Health, and his colleagues wrote that some older people are taking advantage of greater social acceptance of marijuana use and marijuana legalization in some states. The authors noted that previous studies have linked medical marijuana laws to an increase in pot use among all age groups of adults.

Medical issues may also help explain the rise in senior pot usage, the authors said. Some older adults are experiencing age-related health problems —such as glaucoma, nausea, neurologic diseases, neuropathic pain and cancer symptoms —that can be treated with medical marijuana in the 21 states that currently allow it, the researchers said.

Though much of the discussion about legalizing marijuana has focused on its effects on children, Kaskie and his colleagues argued that marijuana use among older people will pose its own public health challenge, especially as the American population ages.

Kaskie and his colleagues said that the body of research so far offers doctors and other experts only "glimpses into this imminent public health challenge." And many key questions remain unanswered, they said: Why do older people start using cannabis? Does marijuana use lead to substance abuse? How are doctors talking to their older patients about cannabis? Should medical marijuana laws be extended to cover age-related medical conditions? Should cannabis be recommended as a substitute for opioids or to treat end-of-life pain?

"At this time, these sorts of critical public health policy questions cannot be answered, largely because there is a pervasive lack of reliable and representative information being collected about cannabis and older persons," the researchers wrote.

They recommended statewide and national surveys to look at how legal, medical and social changes have affected older adults' attitudes and behaviors regarding marijuana use.