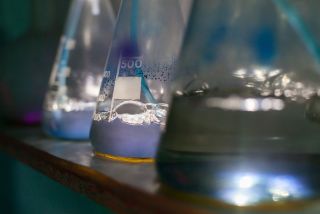 A family in Australia who developed health problems found out their sickness had an unusual cause: They had unknowingly moved into a home that was a former meth laboratory, according to a new report of the case.

Just months before the family moved in, the home was the site of a clandestine drug laboratory, where the owner made methamphetamine.

Police discovered the laboratory in May 2013, arrested the owner and notified other authorities that the home needed to be decontaminated because it contained harmful chemicals. The local council issued a notice for the cleaning of the property, but this cleaning wasn't performed, the report said.

The property was sold a few months later, but the new owners were never informed that the home had previously been a meth laboratory. In October 2013, the family of five — a mother, father and their three children — moved in. ['Breaking Bad': 6 Strange Meth Facts]

While living in the home, all of the family members experienced health problems, which continued for some time after they moved out. The mother reported a persistent cough, along with weight loss and excess energy, and the father reported worsening memory, dizziness and blurry vision.

The youngest child, a 7-year-old boy, developed asthma-like symptoms, as well as behavioral changes, including anxiety and symptoms of attention deficit hyperactivity disorder (ADHD), which he did not have before the family lived in the home. All of the family members reported having sore, watery eyes, and several members reported trouble sleeping.

Exposure to methamphetamine residues can cause symptoms similar to those seen in people actually taking meth, according to the Illinois Department of Public Health (IDPH). These include high energy, anxiety, trouble sleeping, increased distractibility, weight loss and memory troubles, according to the National Institutes of Health. Exposure to the chemicals involved in making meth can cause other symptoms, including nose and throat irritation, dizziness and breathing difficulties, IDPH says.

The report highlights the importance of effectively identifying and decontaminating clandestine drug laboratories, the researchers said.

"If properties formerly used for the clandestine manufacture of methamphetamine are not properly cleaned, the public might be unknowingly exposed to drug residues," the researchers who reported the family's case wrote in the Jan. 6 issue of the journal Morbidity and Mortality Weekly Report, which is published by the Centers for Disease Control and Prevention. "Appropriate identification and management of these properties, including measures by authorities to prevent the sale of unremediated homes, are important to prevent exposures and adverse health effects."

The family's 11-year-old daughter had a lower level of methamphetamine in her hair samples, around 50 pg/mg. The mother's level was 17 pg/mg, and the father's level was 5 pg/mg.

The family reported that most of their health problems resolved within a year of moving out, according to the researchers.