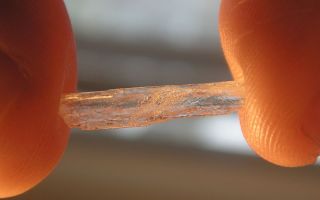 When an Oregon family started experiencing mysterious health problems soon after moving into a new home this summer, a neighbor came forward with a likely explanation: The previous owners had produced methamphetamine there. The house had never been properly cleaned after the drug cooks moved out, but an environmental engineer who studies meth labs says the family may not have been safe even if a cleanup had taken place.

His research suggests that once a house has been used to make meth, the drug can continue to percolate in the walls for years.

"We said, 'It needs a little bit of love, but it's got good bones,'" Jonathan Hankins told Yahoo News of the home he and his wife Beth bought in Klamath Falls, Ore., from Freddie Mac. "We just had no idea that those bones were poisonous."

Breathing problems started for Beth within days of move-in. Soon Jonathan was suffering from nosebleeds and migraine headaches, and the couple's 2-year-old son, Ezra, had mouth sores. The Hankins said a test showed methamphetamine contamination was at 80 times the state's designated safe limit. [Was D.A.R.E. Effective?]

Glenn Morrison, an associate professor of environmental engineering at Missouri University of Science and Technology, is working with the National Institute of Standards and Technology to study how methamphetamine accumulates in building materials, furniture and common household items during production. His findings so far seem to validate Jonathan Hankins' choice to call his house's "bones" poisonous.

"You can have a very clean wall and still have the walls releasing chemicals," said Morrison. "Let's say the meth lab was busted, and they took out everything and washed it down and aired it out for a week or so, that's probably sufficient to remove solvents and things that end up in dust. What it doesn't do is get at those chemicals — methamphetamines and similar compounds — that have penetrated through the drywall and into the building structure."

Morrison said methamphetamine itself isn't nearly as dangerous as many of the chemicals cooks use to make it, but it's less volatile, or prone to vaporization, than most of its precursors, so it's an unusually sticky and resilient threat. For this reason, meth lab-remediation companies tend to use it as an indicator chemical, assuming that if wipe tests for methamphetamine come up clean, the other chemicals, which can include hydrochloric acid, iodine and various metals, must be gone as well.

But Morrison said these tests won't necessarily pick up methamphetamine vapors that embed in a home's insulation, where they're protected from scrub-downs and ready to leak out later. His team's early estimates suggest a meth lab operating in a house for a few weeks could introduce enough methamphetamine vapors into the insulation to sustain unsafe levels in the home for months, or even years, after.

One of the questions Morrison's research will try to answer is how high concentrations of wall-bound meth would have to be before a home's inhabitants would begin to get passive drug doses comparable to a daily Adderall (an attention deficit hyperactivity disorder medication related to methamphetamine) regimen. He hopes his findings will inform meth lab-cleanup procedures to better protect residents of former cook sites.

Jarrad Wagner, an associate professor of forensic toxicology at Oklahoma State University and a former chemist at the FBI Laboratory, said the suggestion that building materials absorb chemicals during meth production and release them over time is reasonable. But Wagner said it's still not known what exactly the effects of ambient exposures would be or which chemicals should be held responsible for illnesses experienced by homeowners like the Hankins.

"At this point, I do not think it is clear if [illness] is due to metal exposure, solvent exposure, methamphetamine exposure, by-product exposure or some combination of all of these," Wagner wrote in an email to Life's Little Mysteries.

Though some states have authored their own guidelines, no national standards exist on meth lab-cleanup or acceptable levels of methamphetamine exposure.