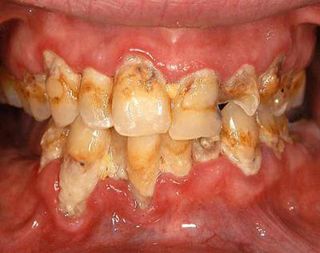 As in the photo, some meth users describe their teeth as "blackened, stained, rotting, crumbling or falling apart." Often, the teeth cannot be salvaged and must be extracted.
(Image: © American Dental Association)

The conventional "this is your brain on drugs" image showing a frying pan and sizzling egg may be outdated. Today's anti-drug ads are keeping up with the times.

Case in point is a series of "modern" ads showing meth-addicted teens in horrific settings: a malnourished teen standing in the shower picking at scabs all over her body until they bleed. Apparently, she thought they were bugs crawling beneath her skin.

Today, the American Dental Association (ADA) warned users, and potential users, about the perils of methamphetamine to a healthy smile. One consequence of taking the drug called "meth mouth" could lead to rampant tooth decay and teeth that are blackened, rotting, crumbling or falling apart [image], said ADA president Robert M. Brandjord.

More than 12 million Americans have tried methamphetamine, according to the 2004 National Survey on Drug Use and Health. Most of the users range from 18 to 34 years old.

Known by many street names, including speed, ice, crank and crystal, methamphetamine is a very strong central nervous system stimulant. Once meth enters a person's body, it releases a surge of dopamine, leading to the typical euphoria described by users.

But what is long term? Called "meth mouth," the ADA stated users can go from having a sparkling smile to one of decay and tooth loss in about a year. For one, the drug dries out a person's salivary glands leading to the cottony-mouth feeling. Without the diluting effects of saliva, the acids in your mouth--produced by various foods and bacteria--begin to eat away tooth enamel.

Adding fuel to this mouth decay, meth users may forget to brush their teeth. Whereas the effects of cocaine last about an hour, a meth high can linger for 12 hours. During this half-day high, personal hygiene may not be at the top of the list of things to do.

"The extensive tooth decay of meth mouth is attributed to the drug's dry-mouth effect and its propensity to cause cravings for high-calorie carbonated beverages, tooth grinding and clenching, and extended periods of poor oral hygiene," Brandjord explained.

To highlight the perils of meth mouth, the ADA is posting educational material on their website. The take-home message is "there is no safe level of meth use, but treatment and recovery are possible," said Stephen Pasierb, president and CEO of The Partnership for a Drug-Free America.