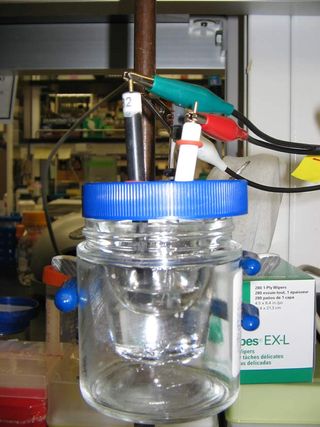 A prototype of the portable cocaine-a-lyzer.

A DNA molecule that stiffens and folds when it encounters cocaine is the engine that drives a new handheld, fast-acting drug detector.

Reliable tests for cocaine take several hours at a laboratory. And although police and customs agents have field tests for cocaine, criminals often use masking chemicals to thwart these so-called "Scott tests." In a Scott test, a chemical changes color when it is added to substances that contain cocaine.

The new detector—scientists have built a rudimentary prototype—sees through the masking agents and can also sense cocaine in body fluids or materials that it comes in contact with. Detecting tiny traces of cocaine in blood or salvia could someday allow the device to work much like a breathalyzer for alcohol, said biochemist Kevin Plaxco of the University of California, Santa Barbara.

So far the device has sniffed out cocaine mixed with many of the substances drug dealers use to cut the drug, including flour, sugar, baking soda, coffee, and mustard powder. It also sees through such chemical masking agents as cobaltous thiocyanate, which sophisticated drug dealers mix into cocaine to fool the Scott test.

The detector works by passing an electronic signal through a type of DNA molecule, called an aptamer, that binds with other specific molecules, in this case cocaine.

This particular type of aptamer, which is synthetic, is usually floppy. When it binds with cocaine, however, it stiffens up and assumes a structured, folded shape, which causes it to allow electrons to pass through it more readily.

The drug detector's engine is a 1-millimeter square electrode that is coated with somewhere around 100 million of the cocaine-friendly molecules. After each test this electrode can be rinsed and reused with a loss in sensitivity of just 1 percent. That means an electrode could be used perhaps 100 times before it would have to be replaced. It also can be used immediately after washing, a key feature for a portable tester, Plaxco says. "We wash it with a cocaine-free buffer and it resets in seconds," he said.

Now the scientists are improving the detector's sensitivity to cocaine, Plaxco said. One route is to make aptamer molecules that are even more receptive to cocaine.

"If the DNA molecule binds cocaine more tightly, then it will take less cocaine to cause the folding," he explained. They are also refining the device's electronic system to detect smaller changes in electrical current, and so smaller amounts of cocaine.

By using different aptamer DNA molecules that favor other substances, the same technology could be expanded to find other drugs, both the illicit type and the therapeutic variety whose levels must be closely monitored in patients.

"We're monitoring a very specific binding-induced change in the DNA itself. And that's why our sensor works straight in blood serum," Plaxco said. "That's the real advantage. Other people have built biosensors that are just as sensitive as ours. Other people have built biosensors using aptamers even, that are just as generalizable as ours. Ours has both of those attributes and it works in blood, and dirt, and food. That's the huge advance."