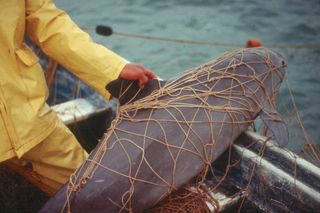 A vaquita entangled in a fishing net. Vaquitas are the most endangered marine mammal in the world.
(Image: © Proyecto Vaquita)

A team of Navy dolphins may be the last hope of survival for the planet's arguably cutest porpoises, called vaquitas (Phocoena sinus).

Considered the world's most endangered marine mammal species, vaquitas, which have dark rings around their eyes and mouth, live only in the upper parts of the Gulf of California in Mexico, according to the Cetacean Specialist Group. The porpoise is often killed in fishing nets, according to Science magazine.

The group of military dolphins, dubbed the Seal Team 6, was specially trained by the U.S. Navy to use their deep-diving and sonar skills to locate undersea mines and other objects, according to the Navy. In this last-ditch effort to save the porpoise species, conservationists hope that the dolphin squad would locate the remaining individuals — the latest report suggests just 60 individuals remain in the wild — in order for officials to relocate a handful of them to breed in captivity, Science magazine reported. [Vaquita Photos: World's Most Endangered Marine Mammal]

Not everyone is sold on the "seal team," however. "I don't like this idea at all," said Omar Vidal, director general of the World Wildlife Fund (WWF) Mexico in Mexico City, as reported by Science magazine. "The risk of killing a vaquita while catching them is very high. With only 50 or 60 animals left, we can't play with that."

Vaquitas are the smallest cetaceans, with an average body length of 3.9 to 4.9 feet (about 120 to 150 centimeters) and weighing in at just 120 pounds (55 kilograms), according to the Zoological Society of London.