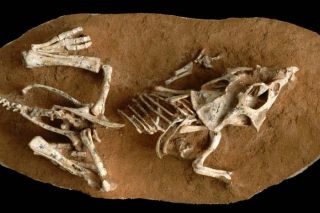 Modern birds hatch their eggs in a jiffy, taking anywhere from a mere 11 days to just less than three months to incubate their fluffy chicks — a far shorter time than their dinosaur ancestors took to do the same deed, a new study finds.

Dinosaurs took anywhere from three to six months to hatch their eggs, according to the study. That long waiting period likely contributed to nonavian dinosaurs' extinction about 65 million years ago, when a 6-mile-long (10 kilometers) asteroid slammed into Earth, the researchers said.

"Some of the greatest riddles about dinosaurs pertain to their embryology — virtually nothing is known," study lead researcher Gregory Erickson, a professor of biological science at Florida State University, said in a statement. "Did their eggs incubate slowly, like [those of] their reptilian cousins — crocodilians and lizards — or rapidly, like [those of] living dinosaurs — the birds?"

Reptile eggs, even those similar in size to bird eggs, take about twice as long to incubate as bird eggs do, Erickson said. Still, some scientists theorized that dinosaur eggs — even those as large as volleyballs — might have undergone rapid incubation, and then passed down this swift hatching time to their bird descendants, he said.

But Erickson and his colleagues thought otherwise, and decided to prove it by studying the teeth of fossilized dinosaur embryos.

"Time within the egg is a crucial part of development, but this earliest growth stage is poorly known because dinosaur embryos are rare," study co-author Darla Zelenitsky, an assistant professor of geoscience at the University of Calgary in Alberta, said in the statement. "Embryos can potentially tell us how dinosaurs developed and grew very early on in life and if they are more similar to birds or reptiles in these respects."

The researchers examined embryos from two dinosaur species: Protoceratops, a Triceratops relative about the size of a sheep that lived in what is now the Mongolian Gobi Desert; and Hypacrosaurus, a large, duck-billed dinosaur found in Alberta, Canada.

The researchers looked at the jaws of the dinosaur embryos using a computed tomography (CT) scanner to construct a virtual 3D image of the embryos' developing teeth. Then, the researchers extracted several of the teeth and studied them under a high-powered microscope.

An analysis of the teeth revealed tiny growth lines showing how long the embryos had been growing inside their eggs.

"These are the lines that are laid down when any animal's teeth develops," Erickson said. "They're kind of like tree rings, but they're put down daily. We could literally count them to see how long each dinosaur had been developing."

By counting the lines, the researchers found that the little Protoceratops embryos were almost three months old, while the larger Hypacrosaurus embryos were nearly six months old.

"Dinosaur embryos are some of the best fossils in the world," said study co-author Mark Norell, a curator for the American Museum of Natural History in New York. "Here, we used spectacular fossil specimens collected by American Museum expeditions to the Gobi Desert, [and] coupled them with new technology and new ideas, leading us to discover something truly novel about dinosaurs."

Discovering the incubation time for dinosaur eggs has large implications for dinosaur research. For instance, a long incubation period likely exposed dinosaur parents to a number of dangers, including predators, starvation and other environmental threats, the researchers said.

Moreover, if dinosaurs spent vast amounts of time incubating eggs, they likely couldn't nest at the temperate latitudes of Canada and then migrate the long distance to the Arctic during the summer, as some scientists have speculated.

But the new study's largest takeaway involves the dinosaurs' extinction. Compared with animals with faster incubation times, the dinosaurs'long incubation periods would have put dinosaurs at a distinct disadvantage following the asteroid impact, the researchers said.

"We suspect our findings have implications for understanding why dinosaurs went extinct at the end of the Cretaceous period, whereas amphibians, birds, mammals and other reptiles made it through and prospered," Erickson said.

The study's findings are intriguing, said David Varricchio, a paleontologist at Montana State University who was not involved with the research.

"These long incubation times likely restricted dinosaurs," Varricchio told Live Science in an email. "If they had parental care, for example, parents would be bound to a specific spot for months (up to six months) of a given year. This would limit migration. Perhaps it would also hinder dinosaurs' response to environmental change."

The study was published online Monday (Jan. 2) in the journal Proceedings of the National Academy of Sciences.