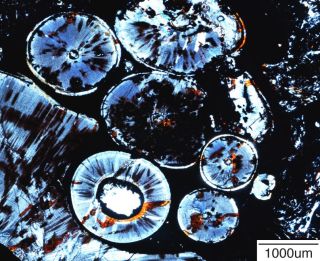 A tiny tumor likely caused a big toothache 255 million years ago for an animal called a gorgonopsian.

The animal was a distant relative of modern mammals that lived before dinosaurs walked the Earth, and the new discovery shows that these tumors existed long before mammals evolved, according to the researchers who found the tumor.

The benign tumor, known as a compound odontoma, is made up of tiny, tooth-like structures, said the researchers, who found it in the gorgonopsian's fossilized jaw. The earliest tumor of this type previously found dated back to the last ice age, making the discovery the oldest compound odontoma on record by 254 million years.  [255-Million-Year-Old Tumor Discovered in Ancient Mammal Relative | Video]

"We think this is, by far, the oldest known instance of a compound odontoma," the report's senior author Christian Sidor, a biology professor at the University of Washington (UW) and curator of vertebrate paleontology at the Burke Museum of Natural History and Culture in Seattle, said in a statement.. "It would indicate that this is an ancient type of tumor."

Sidor found the gorgonopsian jaw in Tanzania's Ruhuhu Valley in 2007, but he was unaware of the tumor at the time. The team came across it when Megan Whitney, a biology graduate student at UW, wanted to examine the jaw to learn how the animal's teeth were nestled within their sockets, she said. The researchers cut the tooth and jaw into slices thinner than a sheet of paper, and then examined the slices under a microscope.

Almost immediately, they spotted strange clusters of tiny, round objects next to the root of a canine tooth. Each cluster had small, tooth-like objects, known as toothlets, that had distinct layers of dentin and enamel.

The researchers realized that "this gorgonopsian had what looks like a textbook compound odontoma," Whitney said in the statement.

The finding came as a surprise because gorgonopsians were not mammals, and previously, compound odontomas had been documented only in mammals, Sidor said.

In people who develop compound odontomas, the tumor's toothlets grow within the jaw's soft tissues, including the gums, causing pain and swelling, and even altering the position of teeth, the researchers said. Although these tumors don't spread throughout the body, people who get them usually have surgeons remove them.

Odontomas are the most common tumors that develop in teeth, but researchers don't know what causes them, the researchers wrote in their report.

Gorgonopsians were apex predators, and part of a group of animals known as synapsids, which were mammal-like reptiles that lived before mammals evolved.

"Most synapsids are extinct, and we — that is, mammals — are their only living descendants," Whitney said. "To understand when and how our mammalian features evolved, we have to study fossils of synapsids, like the gorgonopsians."

Tumors have been found in the fossils of ancient creatures, including duck-billed dinosaurs, one titanosaur (a long-necked, long-tailed dinosaur) and in the carnivorous, Jurassic-age Dilophosaurus wetherilli.

The report was published online today (Dec. 8) in the journal JAMA Oncology.