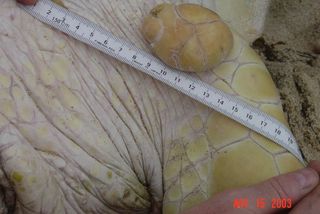 A virus is suspected to cause the growth of tumors on Green sea turtles like this one. A study published in the July edition of the journal Nature Reviews Cancer suggests that cancer poses a conservation threat to some animals, like the green sea turtle.
(Image: © Cynthia Lagueux)

Cancer accounts for about 10 percent of all human deaths. If you think that sets us apart, scientists have news for you: Wild animals die of cancer at about the same rate, and it threatens some species with extinction. "Cancer is one of the leading health concerns for humans," Dr. Denise McAloose, a pathologist for the Wildlife Conservation Society, said in a statement. "But we now understand that cancer can kill wild animals at similar rates." McAloose and her colleagues compiled information on cancer in wildlife and concluded that cancer poses a conservation threat to certain species. The team called for greater protection of animals and people through increased health monitoring. They published their research in the July edition of the journal Nature Reviews Cancer. Cancer threatens the survival of entire species, McAloose said. For instance, the Tasmanian devil, the world's largest carnivorous marsupial, faces extinction from a cancer known as devil facial tumor disease. This contagious cancer spreads among devils usually through fighting and biting. To save the species, conservationists are relocating cancer-free Tasmanian devils to geographically isolated areas or zoos. The study suggests links between wildlife cancers and human pollutants, as well. For example, beluga whales in the St. Lawrence River system have an extraordinarily high rate of intestinal cancer — it is their second leading cause of death. One kind of pollutant in the waters, called polycyclic aromatic hydrocarbons, is known to cause cancer in humans. The compounds are suspected carcinogens for beluga whales as well. Fish in other polluted waterways, including brown bullhead catfish and English sole, also exhibit high levels of cancer. Viruses are another culprit. In some animals, viruses can induce cancers that interfere with reproduction. Genital tumors in California sea lions occur at much higher rates than previously documented, the paper shows. Dolphins, such as the dusky dolphin and Burmeister's porpoise, found off South American coasts, are also showing higher rates of genital tumors. Other virus-induced cancers can affect an animal's eyesight or its ability to feed. Green sea turtles suffer from fibropapillomatosis, a disease that causes tumors to grow on the skin and internal organs. A virus is suspected to cause these tumors. Monitoring the health of wildlife can illuminate the causes of cancer in animal populations and better safeguard us and them against diseases, McAloose said.