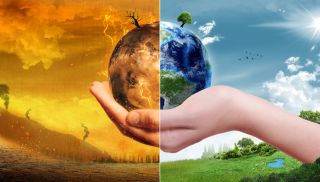 An article casting doubt on climate change that was promoted in a tweet from the U.S. House of Representatives' science committee is "extremely misleading" and "disgraceful," climate scientists told Live Science.

The article in question, written by a staffer at the far-right website Breitbart, contains cherry-picked data that makes it appear as though global temperatures are decreasing, when in reality, 2016 is expected to be the hottest year on record, climate experts said.

The House Committee on Science, Space and Technology, which has 179,000 followers on Twitter, posted the story on Thursday (Dec. 1), saying, ".@BreitbartNews: Global Temperatures Plunge. Icy Silence from Climate Alarmists."

The Breitbart story outright ignores the "deleterious impact that our profligate burning of fossil fuels is having on the planet," said Michael Mann, a distinguished professor of atmospheric science at Pennsylvania State University. [Images of Melt: Earth's Vanishing Ice]

"Just weeks from now, 2016 will go down as the hottest year on record, having beaten out the previous warmest year — 2015 — by a substantial margin," Mann told Live Science in an email. "For anyone, least of all the House Committee on Science, to at this particular moment, be promoting fake news aimed at fooling the public into thinking otherwise, can only be interpreted as a deliberate effort to distract and fool the public."

To illustrate why land temperatures vary more than the ocean's, Trenberth said to imagine a teapot. An empty teapot placed on a hot stove would heat up fairly quickly, but a teapot filled with water would take longer to heat, he said. The land is like the empty teapot; its temperature fluctuates more rapidly with seasonal weather, whereas the water-filled teapot is akin to the ocean. It takes more energy to change its temperature, meaning its temperature doesn't fluctuate as much, he said.

But the Breitbart piece did not include these warmer ground temperatures, making the land temperatures appear colder than usual, Trenberth said.

"[The tweet] is extremely misleading and it's disgraceful actually, because they get it out to a whole lot of people who don't understand that it's wrong," Trenberth said. [The Reality of Climate Change: 10 Myths Busted]

The Breitbart piece claims that the drop in land temperatures was met by "icy silence from climate alarmists." Again, that's not the case, Trenberth said. Scientists fully expected to see a temperature drop, because El Niño has just ended.

El Niño is a phenomenon in the Pacific Ocean in which warm water in the western tropical Pacific Ocean flows eastward toward South America, heating up surface waters off of northwestern South America. These warm waters are more prone to evaporation than cooler waters would be, and they can fuel Pacific hurricanes and other unusual weather events. The El Niño of 2015 and 2016, which ended in June, was among the strongest on record and led to widespread warming while it was occurring, Trenberth said.

"Now, we're in a La Niña," in which oceans absorb heat rather than releasing it as they do during an El Niño, Trenberth said. "This is where it's much cooler along the equator."

He added, "We've been in a La Niña pattern since about summer, but it's only in the last two months or so that it's beginning to have an effect on the weather. It's had a noticeable effect on the atmospheric circulation across the United States in the last couple of months," hence the cool air temperatures measured in October, as Breitbart noted.

Because of La Niña's cooling effects, scientists expect that global temperatures in 2017 will be lower than in 2016, Trenberth said. But in the long run, the global climate is still warming, he said.

Tim Barnett, a research marine physicist at the Scripps Institute of Oceanography, agreed.

"If the temperature changes from one year to the next year, so what? That's natural variability, or something else that's not global warming," Barnett told Live Science. "People really need to stand back and look at the record from a 20-year period to get a good feel. And when you do that, it's very clear that there's an upward trend."

This isn't the first time the House Committee on Science, Space and Technology has raised doubts about climate change on Twitter, but other elected officials tweeted back, refuting the Breitbart story. They included Rep. Don Beyer (D-Virginia), who tweeted, "This isn't factual. It's embarrassing, and Breitbart is not a credible news source. We need to bring *science* back to the science committee."

Live Science reached out to the committee for a comment on scientists' criticism of the tweet, but did not hear back by press time.