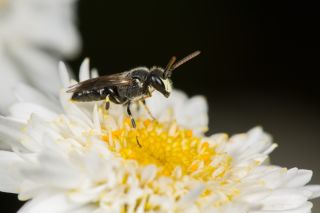 Yellow-faced bees, like this one (Hylaeus hyalinatus), are endangered. Invasive ants are partly to blame for the dwindling numbers.
(Image: © Jaco Visser, Shutterstock.com)

In late September 2016, the U.S. Fish and Wildlife Service (USFWS) added seven of Hawaii's yellow-faced bee species to the Endangered Species List — the first time any bee has been declared endangered. What do we know about their sex lives and could this information be the key to saving these rare bees?

In Hawaii, there are more than 60 species of yellow-faced bee (genus Hylaeus), a solitary type of bee that lives in a wide range of habitats, from coastal areas to high-elevation forests. These bees are the primary pollinators of a common Hawaii shrub called naupaka, which blooms half-flowers and is the focus of a Hawaiian story about star-crossed lovers who are fated to be forever separated.

Though scientists have long been aware of the bees and their importance, "there's virtually nothing known about the mating behaviors of yellow-faced bees," said Sheldon Plentovich, the Pacific Islands Coastal Program Coordinator for USFWS.

That is to say, there have been no rigorous scientific studies on the bees' reproductive behaviors, so everything scientists currently understand about this topic is based on anecdotal observations.

Yellow-faced bees are active throughout the year, though they do seem to have peaks and lulls between seasons. "There are a couple months in the winter where their activity declines," said Jason Graham, a University of Hawaii entomologist whose research focuses on the species H. anthracinus. "You can still find adults, but not nearly as many."

The mating game begins with a female bee sitting on a plant, generally naupaka or heliotrope, where she may be foraging for nectar or pollen. Up to 10 male bees — which have eponymous yellow markings on their faces, as opposed to the pure black faces of females — will begin hovering in a kind of cloud and flying in erratic, circular motions 6 inches to a foot above the female.

A male from the hovering group will then touch down on the female for less than a second before flying back up to the group; other males will follow suit. It's unclear the purpose of this behavior, but the males may be trying to see if the female is receptive to mating, Graham said, adding that the female "doesn't really pay them any mind."

Eventually, one male will land on the female's back and stay for a while, tapping his antennae against her attennae and the side of her head. Again, it's unclear what function this behavior serves.

After about a minute, and if the female doesn't fly away, the male will reposition himself, moving back a little to curl his abdomen under the female's, allowing him to insert his aedeagus (reproductive organ) into her vagina for insemination. Graham has seen copulations last anywhere between 5 seconds and 6 minutes, while Plentovich has observed the act lasting for up to 20 minutes.

In some cases, a second male may land on the copulating pair before being shaken off. "It's almost like a frenzy in some situations," Plentovich said. Males in the 'cloud' may also try to mount each other in air — Graham suspects this mounting is a form of male-male competition — or "bash" against each other while on a plant, according to Plentovich.

After mating, the male will fly away, while the female will go about her business.

Females prefer to build their nests in holes in coral rocks washed ashore or in the hollow stems of naupaka or other coastal plants. The nest cells are made of packed pollen and a kind of waterproof cellophane material the female produces — each nest cell contains just a single egg.

"That is one of the reasons why solitary bees tend to be more threatened than social bees, which lay tons of eggs," Graham said.

To help protect yellow-faced bee nests from invasive ants, which are playing a major role in the bees' dwindling numbers, Graham developed artificial nests. Each nest is a wooden box with pre-drilled holes, which is hung from a branch via a cord that's covered in a sticky material to prevent ants from getting to the eggs.

The bees are successfully using the artificial nests in their natural habitat and the researchers hope to someday use them to reestablish yellow-faced bee populations in areas they once lived.