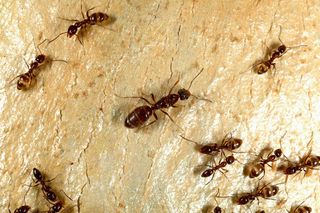 Argentine ants, the large ant in the center is a queen.
(Image: © Philip Lester)

Not all invasive species must be fought back using electrified barriers, natural enemies imported from afar, campaigns to turn them into food, or other, often pricey means.

Instead, it appears that in some unusual cases organisms that have flourished unwanted outside their native range simply retreat on their own.

Researchers in New Zealand have watched this happen to colonies of Argentine ants, Linepithema humile, a non-native species first spotted in the country in 1990. [Gallery: Invasive Species]

These ants have traits that appear to set them up for success as an invasive, including an omnivorous diet, a lack of pickiness about nesting sites, a lack of conflict amongst themselves, a high reproductive capacity thanks to multiple queens in a colony, and an affinity for living near humans, according to Meghan Cooling, a study researcher and graduate student at Victoria University in Wellington, New Zealand.

The Argentine ants live at high densities that allow them to push out native ant species, but unlike the invasive fire ants in the United States, they don't sting, according to Cooling.

"What makes them so annoying is the extremely high population densities they can reach, so that they just take over a garden or yard and make sitting outside very unenjoyable. They also invade people's homes and cupboards in search of food, particularly sweet things," Cooling wrote in an email to LiveScience. "They can be a serious problem for agriculture as well, because they tend and protect hemipteran pests [also called true bugs], such as aphids and scales insects, which can lead to outbreaks of these pests."

In 2002, the cost of controlling them was projected to climb to NZ $68 million (roughly U.S. $52 million) per year once the ants had established themselves throughout their predicted range.

Invasive species are frequently the targets of elaborate and sometimes expensive efforts to eradicate them, or at least reduce their numbers. For example, an electrified barrier has been installed to keep Asian carp out of the Great Lakes; researchers are turning to European weevils to control invasive garlic mustard in North America; and lionfish in the Caribbean, likely aquarium escapees, are the subject of a cookbook.

However, in 2011, Cooling and her colleagues checked on 150 locations where ant populations were spotted between 1990 and 2008. They found that 60 of these had vanished and more than 30 of the remaining sites had only small, low-density populations remaining, according to Cooling.

So why appear to thrive, then disappear? Argentine ant populations have shown low genetic diversity before, so the researchers suggest that inbreeding may have left them vulnerable to disease.

Other invasive populations, like the yellow crazy ant in the Seychelles and the giant African land snail, have declined or collapsed, however, few studies have documented this phenomenon, according to Cooling.

Looking at climate in these regions, they found that the Argentine ants seemed to last longer in regions with higher temperatures. While work overseas has indicated that rainfall can affect the ants' persistence, the relationship in New Zealand remains unclear, according to Cooling.

Climate change appears to give the ants something of a reprieve. From projections created by climate modeling, the researchers found ant populations in part of the country could be expected to stick around a few years longer before disappearing.

"Given the local presence of this invasive species for short durations of 10–20 years, and the apparent recovery of the resident communities after their collapse, it seems that the long-term ecological or evolutionary effects of Argentine ants in New Zealand may not be as dire as first feared," they write.