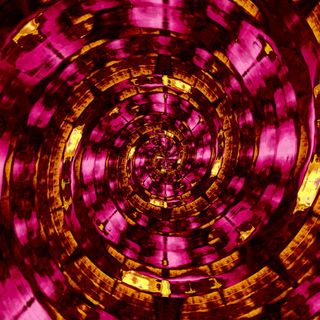 A heated election season is turning into a complicated transition as Donald Trump prepares to assume the U.S. presidency. The national mood is not conducive to peace and harmony around the Thanksgiving table, to say the least.

Some families will be able to discuss these political upheavals productively. Others will not. If you and your relatives fall into that second category, we're here to save your holiday from devolving into shouting matches, spilled wine and overturned bowls of mashed potatoes. When Uncle Marley starts rambling about those dastardly Democrats or Aunt Susie brings up those shifty Republicans, you can derail the conversation quickly with some weird science.

Here is a list of timely and bizarre science stories that (we hope) will lighten the mood and promote familial togetherness this holiday season. Good luck.

Beer connoisseurs will love this one: Scientists have brewed a beer using yeasts found in bottles that went down in a shipwreck 219 years ago.

The doomed ship, the Sydney Cove, ran aground in a storm in 1797 near the island of Tasmania. The 17 survivors set off in open boats for the Australian mainland. They made it to the coast, promptly wrecked again and then had to journey 370 miles (600 kilometers) by foot to the settlement of Port Jackson. Only three made it.

But there were other survivors amid the wreckage. In the 1990s, archaeologists found 26 beer bottles in the hold of the shipwreck. Some of the yeasts inside the bottles were still alive. This month, a chemist at the Queen Victoria Museum in Launceston, Tasmania, announced that he'd successfully grown new yeast from these old microbes and used it to bring the ancient brew back from the dead. The taste is apparently mild and a bit sweet. [See Photos of the Recreated 220-Year-Old 'Preservation Ale']

Suggested discussion questions: Would you drink "zombie beer"? How old would an archaeological specimen of food or drink have to be before you'd refuse to taste it? What would you name your archaeologically themed brewpub?

An amateur collector of fossil poop has won a Guinness World Record for his hobby. American George Frandsen has 1,277 pieces of fossilized feces, or coprolites, from eight countries and 15 U.S. states. Maybe save this conversation piece for after the meal.

Frandsen's prize jewel is a 4.2-lb. (1.9 kilograms) piece of poop that still holds its form after 20 million years. It was, er, fashioned by a 20-foot-long (6 meters) crocodilian in South Carolina during the Miocene epoch. In 2014, another piece of poop, also likely from the Miocene, went up for auction at $10,000, and was snagged for an $8,500 bid from an anonymous bidder, according to an NPR report.

Suggested discussion questions: How much would you pay for a piece of fossilized poop? What's the weirdest collection you've ever heard of?

No matter who's in charge, the world is a stunning place. Take Hranická Propast, a cave in the Czech Republic. Divers recently discovered that this cave is a whopping 1,325 feet (404 m) deep — and possibly deeper. That's not much shorter than 432 Park Avenue in New York City, an ostentatious residential building that overlooks Central Park and stands at 1,396 feet (426 m).

New York's condos are a bit more welcoming, though. Divers couldn't even penetrate to the depths of Hranická Propast. The final explorations were done by remotely operated vehicles. Also, the water is so hot and saturated with carbon dioxide that it irritates divers' skin, according to Atlas Obscura.

Side note: Cave diving is dangerous in general. Even experienced divers can die in caves they know well. A 2016 story by the BBC about four divers plunging into an underwater cave in Norway highlighted some of the risks: narrow tunnels that can trap divers; cold water that can cause hypothermia if the dry suit tears; hypercapnia, or carbon dioxide poisoning, which can occur if a panicky diver starts breathing too fast; and decompression sickness, which happens if divers surface too quickly.

Suggested discussion questions: Are cave divers taking too many risks? Would you try an extreme sport, such as cave diving, free diving or extreme skydiving? If you could explore any unknown reach of the natural world, where would you go?

It's probably not aliens. Let's get that right out front. But a recent detection of strange light signals coming from 234 stars in the Milky Way had some researchers seriously considering that intelligent extraterrestrials might be out there. [Greetings, Earthlings! 8 Ways Aliens Could Contact Us]

The results were published in a reputable journal — Publications of the Astronomical Society of the Pacific — but astronomers not involved in the study warned that the strange signals could be an artifact of how the researchers processed their data. Even the authors of the study cautioned that the findings should be taken as preliminary, Live Science's sister site Space.com reported. Researchers are planning further study of the anomalies using the Automated Planet Finder telescope at the Lick Observatory in California.

Well, this isn't alarming at all: A Japanese company has found a way to manufacture hyperrealistic and completely mobile Tyrannosaurus rex replicas. There's a YouTube video courtesy of Kyodo News demonstrating the technology. The good news is that humans haven't yet been foolish enough to create free-ranging robot dinosaurs: The T. rex robots are controlled by human operators who wear the mechanical replicas like costumes. According to Japanese news site 47News, the replicas are made of ultralightweight materials such as carbon fiber, so each weighs only about 80 lbs. (35 kg).

"The company has held a live show using the dinosaurs in the nation," 47News wrote (via Google Translate). "It is popular with children."

Suggested discussion questions: How many children have been scarred for life by hyperrealistic live dinosaur shows? How long until this combines two Michael Crichton storylines and goes full "Jurassic Park"/"Westworld"? Which is scarier, a robot "Jurassic Park" or a genetically engineered real-dinosaur "Jurassic Park"? What qualifications do you think are required for the job of wearing a mechanical dinosaur costume?

6. Your phone is so gross

Your phone is supergross — so disgusting that researchers can take a swab off your smartphone's screen and determine things such as what kind of beauty products you use, what you eat, where you've been and what kind of meds you take.

Reporting in the journal Proceedings of the National Academy of Sciences, researchers found such secrets as antifungal skin creams and hair loss treatments in the chemical residue on 39 volunteers' smartphone screens. They were also able to identify herbs and spices from the participants' diets, antidepressants, sunscreen and caffeine.

That was a molecular analysis, but biological analysis of the microbes on phones can reveal even more. First, cellphones carry more germs than toilet seats, researchers say — after all, they're generally cleaned less often. The bacteria on phones match the bacteria on their owners' skin, according to 2014 research. In that study, researchers found more than 7,000 different types of bacteria on 17 smartphones. Luckily, most of the bacteria found on the phones were harmless. People's skin "microbiome" has more in common with their own phone's bacterial load than that of other people's phones. (Sounds like Touch ID isn't the only unique key for your phone.) The researchers suggested that phones could be used to monitor people's health and to see whether they're carrying infectious diseases. [27 Devastating Infectious Diseases]

Discussion questions: Are you creeped out by how much information the surface of your phone carries about you? Are you maybe getting out the screen cleaner right now? Would you rather someone swab down your phone or swab down your skin to check your health?

Remember when everyone was obsessed with "Pokémon Go," the mobile video game that overlays adorable cartoon creatures with the real world via a smartphone camera? That was in July. A simpler time.

Well, a recent paper in the journal Conservation Letters wants you to linger on the subject. Researchers questioned whether "Pokémon Go" might spur interest in the natural world — after all, the goal to "catch 'em all" is not so far off from hobbies such as bird-watching or leaf peeping. Plus, it got people to go outside.

"Following the model of 'Pokémon Go,' games that encourage users to look for real species could provide a powerful tool for education and engagement," the researchers wrote in the article. "[Augmented reality] could also be used in zoos and protected areas to provide visitors with information about species and their habitats."

But the researchers also warned that people might damage fragile ecosystems while tramping around looking for Pokémon and that augmented reality might lessen interest in the natural world by eclipsing it with fiction.

Suggested discussion questions: Do you think "Pokémon Go" or similar games could bolster conservation? When's the last time you even saw someone playing "Pokémon Go"? Wow, that was a weird summer, right?