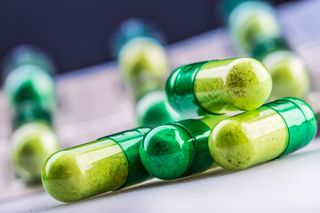 Dr. Mark Abramowicz is president of The Medical Letter, a nonprofit publication that provides unbiased, rigorous drug evaluations for physicians, pharmacists, libraries, hospitals and teaching institutions. Before joining the editorial staff of The Medical Letter, Abramowicz was a member of the Pediatrics Department at the Albert Einstein College of Medicine. Abramowicz contributed this article to Live Science's Expert Voices: Op-Ed & Insights.

Drug prices are in the headlines: inflated costs of life-saving EpiPens, the many thousands of dollars for drugs that can cure hepatitis C, and hundreds of thousands to save children with rare diseases such as lysosomal acid lipase deficiency — a life-threatening genetic disease in which an enzyme that breaks down certain lipids doesn't work properly, leading those lipids to accumulate and affect the functioning of organs and growth in general.

There are two simple reasons for these high costs: a lack of generic-drug competition, and pharmaceutical companies' success in marketing their brand-name drugs.

Yet one of the most effective classes of drugs — statins, which treat the leading cause of death in the U.S. — are hardly mentioned in pharmaceutical advertising. What's more, there are generic versions of these drugs that cost much less, and yet you won't see them in commercials. You also won't see them in as many medicine cabinets as you might expect. That's because many doctors prescribe the brand names and many people don't know that the generic versions are just as good. [7 Bizarre Drug Side Effects]

Why is that? The generic versions of statins just don't cost enough to support an advertising budget. But here's what every consumer should know about them.

Heart disease remains the leading cause of death in the United States, according to the National Center for Health Statistics. In addition to the drug-free methods that have been shown to reduce the risk of heart disease and cardiovascular-related deaths — including low-fat diets, low-carb diets, stress tests, angiograms (an X-ray test that shows blood flow in a vein or artery), angioplasties (repairing blood vessels), coronary bypasses and heart transplants — there are also a litany of cardiovascular drugs to treat heart disease.

For many years, there has been general agreement in the medical community that statins (also called HMG-CoA reductase inhibitors) can decrease the incidence of heart attacks and death in patients with atherosclerotic cardiovascular disease, in which plaque — a semi-hardened accumulation of substances made up of fat and cholesterol — builds up inside the arteries, as well as for patients without heart disease who have risk factors such as high blood cholesterol levels or diabetes.

All drugs have side effects, but in controlled trials, statins have been shown to have very few side effects, and the number of heart attacks and strokes they have prevented is substantial. In a study published earlier this year in The New England Journal of Medicine, researchers examined the effect of a statin or a placebo on more than 12,000 men over age 55 and women over age 65 in 21 countries. These study participants did not have cardiovascular disease, and their annual risk of a major "cardiovascular event," such as a heart attack or stroke, was calculated to be about 1 percent. [11 Surprising Facts About Placebos]

After a median follow-up of 5.6 years, the people who had taken a statin had a 25 percent lower chance of dying due to cardiovascular causes or having a nonfatal heart attack or stroke compared with the people who had not taken the statin, the study found.

No drug class has a comparable impact on cardiovascular disease, yet statins are one class of drugs that pharmaceutical companies seem to downplay. They exaggerate the benefits and safety of many drugs, but not statins.

Is cost the problem?

All of the statins marketed in the United States (atorvastatin, fluvastatin, lovastatin, pravastatin, rosuvastatin and simvastatin), with one exception (pitavastatin), are available as generics. But many physicians still shy away from generics, perhaps because they feel more comfortable with brand names that they have customarily prescribed or perhaps because of the persuasiveness of the pharmaceutical industry.

For instance, Collette Dejong of the University of California, San Francisco School of Medicine and colleagues found that industry-sponsored meals were linked to an increased rate of prescribing the brand-name medication, including statins, that was being promoted, though they couldn't establish that one caused the other in the study, published in August 2016 in the medical journal JAMA.

If doctors aren't making the change, it will have to come from consumers. The next time you see an advertisement on television for a new anti-cancer drug that extends life by a month or two and costs hundreds of thousands of dollars (which the commercial probably will not mention), think about why we never see ads for the underused generic statins that can extend healthy lives by decades for just a few dollars a month.

So, the next time your doctor gives you a new prescription for a brand-name medication, be sure to ask if a generic equivalent is available.