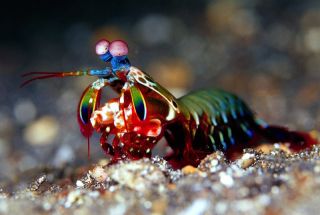 The mantis shrimp, that tiny toughie of the sea, smashes and stabs in a new video showing off the special talents of this predatory crustacean.

The video, produced by KQED San Francisco's Deep Look, shows how some species of mantis shrimp use knockout blows to break open the shells of tasty snails. Other mantis species spear their fishy prey on razor-sharp appendages. There are more than 400 species of mantis shrimp around the world, most of which live in subtropical and tropical waters. [Image Gallery: Magnificent Mantis Shrimp]

Mantis shrimp have long fascinated scientists because of the animal's array of near-superpowers. Species that smash can hit their prey with hammer-like claws that accelerate as fast as a 0.22-caliber bullet, a technique enabled by molecular adaptations in the claw surface. The striking surface of the claw is made of a hard mineral called hydroxyapatite, arranged in vertical pillars like pylons holding up a bridge. Chitosan, a carbohydrate in crustacean shells, is stacked behind this impact zone in varying orientations, which makes it hard for a single crack to travel far through the shell. A striated region along the sides of the claw compresses the whole structure like tape around a boxer's knuckles, researchers told Live Science in 2012.

Inspired by nature, scientists have been developing synthetic materials that mimic the mantis shrimp claw. They said they hope to use these materials to improve products like body armor, football helmets, and even cars and airplanes.

The KQED video, however, focuses on another of the mantis shrimp's out-of-this-world adaptations: its vision. The shrimp's eyes are weird in several ways. First of all, each eyeball has six pupils through which to let in light. This gives the shrimp excellent depth perception, which is pretty crucial when your method of hunting requires perfect aim.

The shrimp also have unique visual systems that use 12 separate receptors to detect colors. (In comparison, humans use only three color receptors to see the rainbow.) Strangely, the shrimp appear to have less distinct color vision than humans. A 2014 study found that the animals can differentiate colors with wavelengths about 25 nanometers apart, compared with humans, who can differentiate colors with wavelengths only a nanometer or two in difference.

However, the mantis shrimp's weird color receptors might enable it to do its color processing in the eye, rather than the brain, as humans do, the study researchers told Live Science at the time. That could mean the animals pick out colors very rapidly. The shrimp can also see ultraviolet light, which humans can't.

Mantis shrimp undeniably beat out humans in one area of vision. The shrimp can see polarized light. As the KQED video explains, sunlight hits the eye in a chaotic way, with wavelengths traveling in all directions. Some surfaces, like fish scales, polarize this light, essentially gathering the wavelengths and reflecting them back out in a more organized way. The human eye can't see this polarization, but the mantis shrimp eye can. Some parts of the animal's body also play this polarization trick, which indicates that the shrimp are likely communicating to one another with their polarized coloration.

Polarization is interesting to medical researchers because some tissue injuries and even cancer cells show up differently under a polarized lens, according to KQED. In 2014, researchers led by Viktor Gruev at the University of Illinois at Urbana-Champaign developed a biosensor using metallic nanostructures that mimics the mantis shrimp eye. One goal is to use this biosensor to detect gastrointestinal cancers earlier than is possible using a traditional colonoscopy.