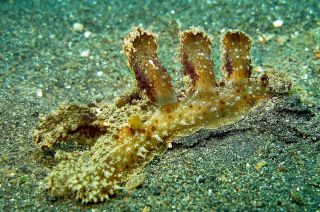 Here's something you don't see every day: a multilimbed, soft-bodied, carnivorous sea slug using its expandable head to suck up prey from the ocean floor.

Recreational diver Emeric Benhalassa captured this unusual scene on video recently at Puri Jati, off the coast of Bali, Indonesia. The footage was posted to YouTube on Oct. 2.

Benhalassa identified the peculiar creature as a nudibranch, a predatory marine mollusk with an elongated body framed by varying numbers of limb pairs. [Marine Marvels: Spectacular Photos of Sea Creatures]

This particular species, Melibe viridis, is native to the Indian and western Pacific oceans. It also has been found in the Mediterranean Sea, which it likely reached via the Suez Canal, according to a July 2003 study published in the journal Proceedings of the California Academy of Sciences.

M. viridis, which can reach up to 5 inches (13 centimeters) in length, is unusual-looking, to say the least — its body texture resembles a wad of leafy greens that has been partly chewed and then spit back out. The individual in the video appears to have seven pairs of oar-shaped limbs, with the biggest ones close to the front of its body and the smallest pairs closest to its tapering back end.

But the creature's most striking feature by far is a large, balloon-like sac at the front of its body, which it uses to catch crustacean prey by casting the loose folds like a net to engulf its meal. M. viridis gulps down its prey and ingests it whole, scientists have found — dissections of several specimens revealed intact crabs in the nudibranchs' stomachs.

In the video, though the nudibranch's body doesn't move much, its "head" repeatedly extends forward and flattens on the seafloor while the oral opening gapes wide, searching the ocean bottom for tasty morsels like shrimp or tiny crabs. Sensory structures line the edges of the opening; when these hairs touch the nudibranch's prey, the sack contracts and traps the prey inside, where it is ingested.

And if you think nudibranch feeding habits look strange, nudibranch sex is even weirder.

Nudibranchs are hermaphroditic, possessing both male and female sex organs. But instead of self-fertilizing as some hermaphroditic animals do, nudibranchs exchange chemical signals during mating to determine which of the pair will assume the female role.

And for a nudibranch, that can involve amputating a disposable penis or stabbing its mates in the brain with genital darts.