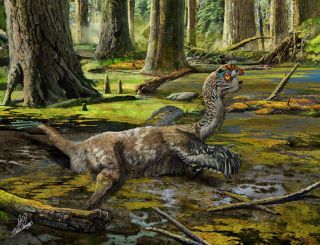 The bird-like dinosaur Tongtianlong limosus likely died after getting stuck in the mud.
(Image: © Zhao Chuang)

More than 66 million years ago, a feathered dinosaur with two skinny legs and a bony crest on top of its head got mired in the mud, likely putting up a mighty struggle before dying and eventually fossilizing, a new study finds.

The donkey-size dinosaur, known as an oviraptorid, was preserved nearly intact, and found lying on its chest with its neck and wings outstretched, the researchers said. Like other oviraptorids, which were close cousins to birds, it couldn't fly, but it had a sharp, toothless beak that likely enabled it to eat shellfish, plants, nuts and eggs.

"The posture of the animal — the head is standing up, the neck is arched, the arms are spread out to the sides — it looks like it's trying to free itself," said study co-researcher Steve Brusatte, a paleontologist at the University of Edinburgh. "Those signs make us think that it was stuck in mud and trying to get out." [Images: These Downy Dinosaurs Sported Feathers]

Chinese construction workers found the fossil a few years ago after they nearly dynamited the specimen to smithereens. At the time, they were setting off explosives within bedrock so that they could build a foundation for a new high school, and they found the specimen after one of the blasts, Brusatte said.

"The dynamite did destroy a little bit of the back end of the fossil, but luckily, it was far enough away from most of the fossil," Brusatte told Live Science.

The construction workers notified a museum about the finding, and Chinese paleontologists, as well as Brusatte, began examining it soon after. Given its muddy demise, researchers nicknamed the specimen Tongtianlong limosus, which translates to "muddy dragon on the road to heaven" in Mandarin and Latin. (Dragons are often invoked when naming dinosaurs found in China. Both the Velociraptor-cousin Zhenyuanlong suni and the ankylosaur Chuanqilong chaoyangensis include the word "long," which means dragon in Mandarin.)

The "mud dragon" is the sixth newly identified species of oviraptorid found in Ganzhou, in southeast China. Its discovery indicates that these feathery dinosaurs flourished and diversified during the last 15 million years of the Cretaceous, just before the asteroid slammed into Earth about 66 million years ago and killed the non-avian dinosaurs (including oviraptorids), Brusatte said.

T. limosus lived between 72 million and 66 million years ago — a window that is so broad scientists find it difficult to figure out how quickly or slowly oviraptorids diversified, the researchers noted.

"As the authors point out, it's unclear how much time is represented by the stratigraphic [rock] formation from which the specimen was collected, making it difficult to interpret whether this is a rapid [diversification] or a much slower turnover of species," said Amy Balanoff, a research scientist at the Center for Functional Anatomy and Evolution at Johns Hopkins University, who was not involved in the study. [In Photos: Wacky Fossil Animals from Jurassic China]

In addition to figuring out the diversification rate of these dinosaurs, scientists have a lot of work ahead of them to determine "how these new fossils fit in the evolutionary tree of oviraptorosaurs," Balanoff said.

"We have barely scratched the surface of this region in China," said Gregory Funston, a doctoral candidate in the Department of Biological Sciences at the University of Alberta in Edmonton. "Every year, fantastic new finds pop up, but there is still so much left to learn."

"Why oviraptorids are able to flourish but other dinosaurs are in decline is perplexing," Funston, who was not involved in the new study, added. "There may have been some aspect of the diet or lifestyle that allowed them to survive and thrive."

The study was published online today (Nov. 10) in the journal Scientific Reports.