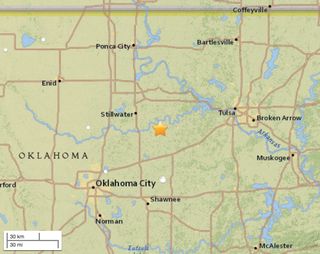 A 5.0-magnitude earthquake struck near Cushing, Oklahoma, this evening (Nov. 6) at 7:44 p.m. local time, according to the U.S. Geological Survey.

The epicenter of the earthquake was 1.8 miles (2.8 kilometers) west of Cushing and nearly 54 miles (87 km) northeast of Oklahoma City.

Though no injuries have been reported, several buildings in Cushing were damaged, according to the local fire department, as reported by ABC News. [The 10 Biggest Earthquakes in History]

The shaking comes on the heels of the state's largest earthquake on record — a 5.8-magntidue quake that shook Pawnee, Oklahoma, on Sept. 3. Cushing is about 25 miles (40 km) south of Pawnee. Since Oct. 30, there have been 18 other earthquakes in Oklahoma, ranging from magnitude 2.5 to 4.5, according to the USGS.

And in May 2014, a rare alarm was sounded when the USGS and Oklahoma Geological Survey issued an earthquake warning for the first time in a state east of the Rockies. The alarm warned of an increased risk of an earthquake larger than magnitude 5.0 striking Oklahoma.

Although earthquakes are less frequent in areas east of the Rockies, compared with west of the mountain chain, those temblors are often felt over a much larger zone, according to the USGS. This evening's earthquake was felt as far away as St. Louis to the northeast, Dallas to the south, and shaking was even reported in Kansas, according to the USGS "did you feel it" map from the public's reports.

Few earthquakes east of the Rockies, such as in Oklahoma, have been traced to known geologic faults, which can be used by scientists to look at the history of earthquakes along that plate boundary.

The USGS has not provided a source of this particular earthquake, but mounting evidence suggests that human activity may be causing an uptick in earthquakes in the state.

"Since 2009 rates in some areas, such as Oklahoma, have increased by more than an order of magnitude," the USGS said in September, referring to the rates of induced, or human-caused, earthquakes. Other human activites linked to seismic activity include hydraulic fracturing, in which a water mixture gets pumped underground to break up rocks and release gas, and fluid withdrawal, which can refer to the withdrawal of oil and gas, groundwater or hot water/steam for geothermal power, the USGS says.

However, linking an individual earthquake to human activity is tricky. "[I]n some regions, such as the south-central states of the U.S., a significant majority of recent earthquakes are thought by many seismologists to have been human-induced," the USGS states. "Even within areas with many human-induced earthquakes, however, the activity that seems to induce seismicity at one location may be taking place at many other locations without inducing felt earthquakes."