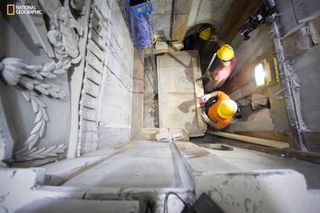 An unobscured view of the limestone bedrock of the tomb said to belong to Jesus Christ.
(Image: © ODED BALILTY / NATIONAL GEOGRAPHIC)

New images from a conservation project in Jerusalem reveal the original limestone bed where the body of Jesus Christ is said to have been laid out after his crucifixion.

The rock-hewn burial platform was exposed for just moments as conservators from the National Technical University of Athens worked to shore up the shrine surrounding the site. Their efforts revealed a marble casing with a cross carved into it that may date back to the Crusader era, between the 11th and 16th centuries. The team also found remnants of the original rock wall of the tomb.

"I'm absolutely amazed. My knees are shaking a little bit because I wasn't expecting this," Fredrik Hiebert, an archaeologist with the National Geographic Society, a partner in the excavations, told National Geographic magazine, which originally reported the findings. [Jesus' Tomb: See Photos of the Church of the Holy Sepulchre]

The making of a holy site

The conservation effort is the culmination of nearly 60 years of negotiations, but the story really begins nearly 1,700 years ago. The supposed site of Jesus' burial was first identified as a holy place in A.D. 326, when Helena, the mother of the Christian Roman emperor Constantine, traveled to Jerusalem and asked locals where Christ had been crucified and buried. She was pointed to a limestone cave in an area pocked with first- and second-century burials. According to Orthodox tradition, Helena ordered excavations and found not only Jesus' tomb, but three crosses and some iron nails. To determine which cross Jesus had died on, church officials held each over corpses on their way to be buried. One of the crosses brought a corpse back to life, revealing it to be the true cross, according to Orthodox readings.

Atop the site was a pagan temple, which Helena and Constantine ordered to be torn down. The top of the cave was removed, and a new shrine was built over the tomb so that pilgrims could look down and view the stone. Meanwhile, construction began on the sprawling Church of the Holy Sepulchre surrounding the shrine. The church took about 10 years to build, according to the histories of the Eastern Orthodox Church. Another wing surrounds the spot where Jesus is said to have been crucified. [Proof of Jesus Christ? 7 Pieces of Evidence Debated]

The shrine itself is known as the Holy Edicule. By 1555, marble cladding had been put over the original limestone to protect it from souvenir seekers and graffiti carvings. This cladding had not been removed until today's ongoing conservation project. The shrine itself has been damaged and rebuilt many times over the centuries, most recently in the early 1800s, after a fire destroyed it.

The Greek Orthodox Church, the Armenian Orthodox Church and the Roman Catholic Church jointly control the Church of the Holy Sepulchre, with some presence by the Syriac Church, the Egyptian Copts and the Ethiopian Orthodox Church. The main stakeholders agreed in 1958 that the Edicule that surrounds the original rock tomb needed to be preserved; already, it was being held up by ugly iron girders.

It took nearly 60 years for all of these groups to agree on a conservation proposal. The National Technical University of Athens opened the marble cladding that had been in place for at least 500 years last week, revealing a layer of loose fill material. Painstakingly brushing it away, they uncovered one last layer of marble and the original limestone bedrock on Friday (Oct. 28), National Geographic reported.

"We can't say 100 percent, but it appears to be visible proof that the location of the tomb has not shifted through time, something that scientists and historians have wondered for decades," Hiebert told the magazine. [In Photos: A Journey Through Early Christian Rome]

An investigation by University of Oxford archaeologist Martin Biddle more than 20 years ago suggested that the Edicule might contain a first-century tomb, said Ken Dark, an archaeologist at the University of Reading who was not involved in the excavations. The new project, which provided a high-tech look at the structure, was unique in that it looked at the original tomb itself, Dark told Live Science.

"The GPR [ground-penetrating radar] survey may indicate that much more of the rock-cut tomb survives inside the surrounding structure than was expected," Dark said. "If so, this is the really important discovery from the work reported."

The rough limestone bed that restorers uncovered was protected by a broken slab of marble inscribed with a small cross.

Conservators have already replaced the marble, hiding the limestone away, perhaps permanently. The team injected mortar around the limestone slabs intended to be a permanent solution to preserving the Edicule. The restoration work will continue into spring, but when it is complete, workers will be able to remove the iron girders around the Edicule, offering an unobstructed view of the structure.

The team also left a piece of the limestone wall of the original tomb exposed so that pilgrims will be able to view it on visits to the shrine, National Geographic reported. The researchers have been documenting each portion and layer of the tomb for future study. Graffiti on the stone could reveal more of the history of the tomb, Biddle told National Geographic.

"The surfaces of the rock must be looked at with the greatest care," he said.