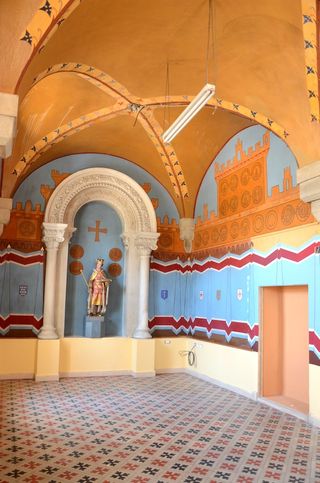 Wall murals portraying Crusader knights and symbols of medieval military orders have been rediscovered in a Jerusalem hospital thanks to a burst water pipe and a storeroom reorganization.

These paintings were the works of a French count, Comte Marie Paul Amédée de Piellat, who believed himself to be a descendant of Crusaders. The count was a frequent visitor to Jerusalem and had the Saint-Louis Hospice built between 1879 and 1896, naming it after St. Louis IX, a king of France and leader of the Seventh Crusade between A.D. 1248 and 1254.

During World War I, however, the hospital came under the control of Turkish forces, who painted over the designs with black paint. The count returned to Jerusalem to restore his murals, but died in the hospital in 1925, his work undone. [See Images of the Rediscovered Murals]

More recently, the nuns who run the hospital found some of the forgotten wall paintings while reorganizing storerooms in the building, according to the Israel Antiquities Authority (IAA). A burst water pipe also stripped away modern paint and plaster, revealing more sections of the paintings.

IAA conservators are now working to clean and stabilize the paintings, and are looking for funds to continue the preservation work. There are no plans to turn the paintings into a tourist attraction, however, as the hospital is still in use for chronic and terminally ill patients. Sisters of the order of St. Joseph of the Apparition run the facility.

De Piellat was a devout Christian who wanted to boost the Catholic presence in Jerusalem at a time when multiple religious factions vied for influence in the city. His two-story hospital replaced a smaller medical facility in the city's Christian Quarter. For Saint-Louis, de Piellat chose a location where the Norman king Tancred and his forces camped before storming Jerusalem in A.D. 1099, during the First Crusade. Today, the hospital is next to the Jerusalem municipal building and IDF square, which is on the dividing line between Israeli-dominated West Jerusalem and heavily Palestinian East Jerusalem.

The murals themselves are enormous paintings of Crusader knights dressed in full battle gear. The count also painted the names and genealogy of the families of French Crusaders, including their heraldry symbols. The murals are further decorated with symbols of military and monastic orders and cities conquered in the Crusades.

At the time de Piellat was working, the city was under the control of the Ottoman Turks. During the upheaval of World War I, the Turks took control of the building, according to the IAA, and painted over the Christian murals. The British captured Jerusalem from the Turks in 1917, at the end of the war.

De Piellat returned to his beloved hospital after the war and worked to restore his murals. After his death in 1925, however, no one took up his fallen paintbrush, and the unrestored murals were mostly forgotten.