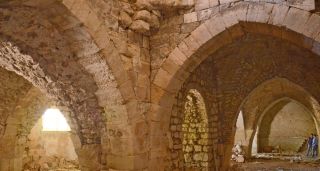 A hall in the Crusader hospital in the heart of the Christian Quarter in the Old City of Jerusalem.
(Image: © Yoli Shwartz, courtesy of the Israel Antiquities Authority.)

A huge Crusader hospital in Jerusalem will soon be opened to the public after a decade-long reconstruction, the Israeli Antiquities Authority (IAA) announced today (Aug. 5).

Until about 10 years ago, the building housed a busy fruit and vegetable market in the Old City of Jerusalem's Christian Quarter. But it would have been bustling with patients and doctors during the Crusader period. (The First Crusade was launched as part of a Catholic military campaign to recapture land under Muslim control; it ended in 1099 with the Christian conquest of Jerusalem.)

When a developer announced plans to turn the site into a restaurant, the IAA had archaeologists investigate the 900-year-old building, which is owned by the Waqf, a Muslim trust that manages some historic structures in the Old City. Only part of the building was revealed during recent excavations at the site but the medical complex once covered some 3.7 acres (1.5 hectares).  [In Photos: Amazing Ruins of the Ancient World]

The hospital was established by the Order of St. John of the Hospital in Jerusalem, also known as the Knights Hospitallers.

"These righteous warriors took an oath to care for and watch over pilgrims, and when necessary they joined the ranks of the fighters as an elite unit," the excavation directors, Renee Forestany and Amit Re'em, said in a statement.

Much of what archaeologists know about the hospital — which has giant pillars and ribbed vaults 20 feet (6 meters) high — comes from historical documents. Similar to a modern hospital, this ancient facility had separate wings dedicated to treating different conditions and it could handle up to 2,000 patients during a time of emergency, the researchers say. The Christian Hospitallers treated sick men and women of other religions, including Jews, and they took care of newborns abandoned by their mothers, according to the researchers.

For all its impressive features, the hospital's medical practices were crude by today's standards. The researchers point to one eyewitness report of a Crusader doctor at the hospital amputating the leg of a warrior just because he had a small, infected wound. "Needless to say the patient died," the IAA said.

Muslim leader Saladin let a group of monks run the hospital even after he drove the Crusaders out of Jerusalem in 1187, the excavators told the Israeli paper Haaretz. The researchers think the hospital continued to operate until an earthquake destroyed most of the building in 1457.

In addition to the restaurant that is set to open inside the historic structure later this year, there will be an adjoining visitors' center to tell the history of the site, according to the IAA.