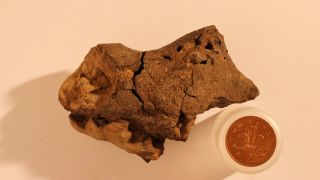 The fossil displays distinct similarities to the brains of modern-day crocodiles and birds.
(Image: © Jamie Hiscocks)

What was going on in dinosaurs' noggins as they dwelled in Cretaceous forests, stalking fierce prey or sitting on a nest of giant eggs? Paleontologists may never know the answer to these questions, but they just got one step closer with the first-ever discovery of brain tissue from a dinosaur.

The brainy finding looked like an unassuming brown pebble when a fossil hunter in Sussex, England, found it more than a decade ago. Discovering any soft tissue from a dinosaur is rare since that material degrades faster than other types of tissue, and dinosaurs lived more than 66 million years ago. [See Images of the Fossilized Dinosaur Brain Tissue]

This particular soft tissue was essentially pickled when the dinosaur died, according to the researchers, which is why it was so well-preserved.

"What we think happened is that this particular dinosaur died in or near a body of water, and its head ended up partially buried in the sediment at the bottom," co-author David Norman, a scientist at the University of Cambridge, said in a statement. "Since the water had little oxygen and was very acidic, the soft tissues of the brain were likely preserved and cast before the rest of its body was buried in the sediment."

Using a scanning electron microscope (SEM) — which produces images in fine detail by moving a beam of electrons over an object — the researchers identified different structures within the pebble-size tissue. In the images, they could make out meninges (tissue that surrounds the brain), strands of collagen and blood vessels, and structures that could be from the brain's cortex (the outer layer of the brain).

Norman and his colleagues determined the brain tissue was likely from a species similar to Iguanodon, a large herbivorous dinosaur that lived during the early Cretaceous period, about 133 million years ago. The structure seen within the fossilized brain tissue showed similarities to that found in birds and crocodiles — dinosaurs' modern-day descendants.

"It was indeed structured rather like that seen typically in reptiles," Norman told Live Science. "It also does not show that dinosaurs were necessarily very smart — their brains did not fill their braincases in this instance."

In reptiles, and assumed for dinosaurs, the brain only takes up about half of the space within the cranial cavity. The rest of the space is a dense region of blood vessels that surrounds the brain. Based on the structures seen in the fossilized brain, the researchers said it is consistent with reptiles.

Though some dinosaurs are believed to have sported quite large brains, namely those that led to modern birds, Norman said this particular fossil does not display such size.

The researchers also cautioned against drawing conclusions about the intelligence of dinosaurs from this particular fossil. However, they do posit that this dinosaur and its relatives had relatively complex behaviors.

"It is reasonable to suppose that iguanodontian dinosaurs of this type were moderately complex behaviorally (no less so than modern crocodilians, for example)," the researchers wrote.

Their findings were published today (Oct. 27) in a Special Publication of the Geological Society of London, in tribute to Martin Brasier of the University of Oxford, who died in 2014. Brasier and Norman coordinated the research into this particular fossil during the years before Brasier's death in a traffic accident.