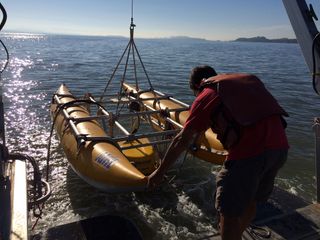 Two faults in the San Francisco Bay Area are "holding hands" and could trigger a devastating earthquake, a new study finds.

A number of faults run along the Bay Area, creating a web of potential seismic activity. However, low-resolution mapping previously left scientists wondering where these faults might connect, and how. In a new study, researchers have determined that the Hayward Fault and Rogers Creek Fault connect beneath San Pablo Bay, the estuary that forms the northern part of San Francisco Bay.

Due to the area's shallow waters and widespread gas in the bay sediments, high-resolution maps of the faults beneath the seafloor were difficult to collect, the researchers said. Maps of these two faults had previously only shown dotted lines of where they potentially lay beneath the Bay. Using a specially designed seismic profiler for shallow waters, the scientists were able to gather sufficient data to build a new map showing where the Hayward and Rogers Creek faults link. [Image Gallery: This Millennium's Destructive Earthquakes]

"We basically, what we call, 'mowed the lawn,'" said study lead author Janet Watt, a geophysicist at the U.S. Geological Survey. "We drove back and forth across the Bay — very unexciting when you're in the field."

The results, however, were exciting. Watt and her team found a clear connection between the faults. Scientists had previously estimated the faults to be about 3 miles (5 kilometers) apart.

By understanding how these faults are connected, scientists can more accurately estimate how they might rupture together in the future, potentially triggering a large earthquake.

"The size of an earthquake that can occur on a fault depends on how long that fault is," Watt told Live Science. "So when we have two faults that are directly connected instead of separate fault segments, it makes a longer fault, and there is a possibility of a larger earthquake."

In the new study, Watt and her team estimated that, if the Hayward and Rogers Creek faults were to both rupture along their entire length, which stretches 118 miles (190 km), the maximum result would be a magnitude 7.4 earthquake. This takes into account the length of the fault and also so-called fault creeps, which are slow and constant movements that steadily release stress along the fault, the scientists said.

For context, Watt explained that a 7.4 magnitude earthquake would release more than five times the energy of the 6.9 magnitude Loma Prieta earthquake that struck northern California on Oct. 17, 1989. This week marked the 27th anniversary of that destructive quake, which caused 63 deaths and an estimated $6 billion to $10 billion in property damage.

Watt said that the researchers will next look at how often in the past these faults have ruptured together. By looking at previous activity, the team could determine the area's current seismic hazard and estimate the risk of future quakes.

"We always need reminders that earthquakes occur, because they can happen so infrequently," Watt said. "And we need to be prepared for something stronger than the Lomo Prieta."

The study was published online today (Oct. 19) in the journal Science Advances.