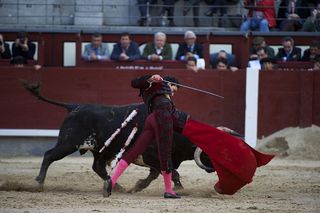 The conclusion of a Spanish bullfight is almost always the same: The matador plunges his or her sword between the bull's shoulders, puncturing the animal's heart and killing it. Next, a team of mules or horses drags the dead animal out of the ring.

(Rarely, when a bull shows exceptional skill, the animal is pardoned and, rather than being killed, lives on the bull ranch where it was raised.)

But what happens next?

A restaurant ad from the program of a bullfight at Madrid's bullring, Las Ventas, suggested an answer: A Madrid eatery, Casa Toribio, vaunted its "rabo de toro de lidia" — a stew made of the tails of fighting bulls — and noted that the tails, or some of them, came from the famed bullring. After the matador kills the bull, it is sent to a slaughterhouse. Its meat is then sold for human consumption, according to various sources, including Martin DeSuisse, founder of the nonprofit Aficionados International, which seeks to educate the English-speaking public about the Spanish bullfight. (DeSuisse is not Martin's last name; he asked to use a pseudonymous last name due to the controversial nature of bullfighting.)

In the past, meat from fighting bulls was used for dog food or animal feed, but today, "the meat is being rediscovered as part of, like, the whole organic craze,"  DeSuisse said

"These animals kind of grow up semi-wild almost, even though they're still, by definition, in a way, domesticated animals," DeSuisse added. "They grow up with very little human intervention, in a sense, so it's as organic, I guess, as meat can be." [Dog Treat Made from Bull Penis May Pose Health Risks]

Fighting bull flesh has uses beyond the butcher shop: It is also processed for pet foods, animal feeds and processed foods for humans, Alexander Fiske-Harrison, author of "Into the Arena: The World of the Spanish Bullfight" (Profile Books, 2011) told Live Science. Beef cattle flesh also has multiple uses, he added, but "because the toro bravo [fighting bull] is neither bred nor reared for the flavor and texture of its meat — it is leaner and tougher, living much longer and living wild — a lesser proportion of its flesh is used for unprocessed human consumption (as opposed to as gelatin, processed foods, animal and pet feed) than that of cattle bred and reared exclusively for that purpose."

Meat from fighting bulls is "the most ecological bovine meat produced anywhere in the world,"veterinary surgeon Ismael Díaz Yubero, author of "Gastronomía del Toro de Lidia," or "The Gastronomy of the Fighting Bull" (Agapea, 2013), told writer Venetia Thompson, of The Guardian, in a 2014 article, contrasting the short lives of beef cattle, which typically live about 18 months, much of that in cramped conditions, with those of fighting bulls, which can live for years on the ranches where they are raised.

The meat certainly has an unusual history, from farm to table, often with a stop at the bullring.

Fighting cattle, of breeds distinct from cattle farmed for eating, are raised on specialized ranches. Early in their lives — and the age varies from ranch to ranch — the breeder determines which bulls will fight, which cows will be selected to breed and which ones will be slaughtered, DeSuisse told Live Science. [Why Do Bulls Charge When They See Red?]

Most of the time, the bulls' moms (cows) are tested for their fighting qualities, partly because some people speculate that a bull's fighting qualities are inherited from the mother, DeSuisse said. In addition, ranchers are hesitant to physically test bulls' fighting abilities because they can fight only once; after a bull has fought, it retains "instinctive memories" of the fight, and its behavior changes, DeSuisse said.

In such a test, known as a "tienta," a matador puts the cow through her paces, using a cape and typical bullfighting maneuvers, DeSuisse said. The matador looks for an animal that charges the cape in a sustained and somewhat predictable way, he added. After these tests, cows are selected to breed, and the others are sent to be slaughtered. The male healthy offspring of the selected cows will fight, entering the ring at age 4 or 5.

At the butcher shop

After the fight, the bull is dragged off and processed at a slaughterhouse, but the specifics of this process vary from city to city, DeSuisse said. In the northern Spanish city of Pamplona, a team of Percheron horses drags off the dead bull, and at a plaza outside the bullring, the animal is further bled into a bucket and then trucked away to a slaughterhouse, butcher Javier Soto Zabalza told writer Paul D. Thacker for an article published on the cooking website Lucky Peach this August. In addition to owning five butcher shops in Pamplona, Zabalza leads the horse team that drags away the fallen bulls at the bullfight, according to the article. [Could You Stomach the Horrors of 'Halftime' in Ancient Rome?]

"Bull meat has a wild taste, Javier says, because the bull dies in the fever of the fight," Thacker wrote.

"In his butcher shops, [Zabalza] sells bull meat for cheaper than regular beef, because it's too lean and is good only for stew," Thacker continued.According to Thacker, Zabalza said some butchers claim to sell "toro de feria," or meat from a bull killed in the ring (as opposed to one not selected to fight in the first place) but that Zabalza is skeptical of those claims.

Not all of the deceased bull's meat ends up on the dinner table. Some parts of the bull may be given to matadors as "trophies" for exceptional performances, DeSuisse noted. If the judge, who evaluates and scores the matador's performance, waves a white handkerchief, it is a signal for one of the "mulilleros," the people who drive the mules or horses that drag off the bull, to cut off one of the animal's ears and present it to the matador, DeSuisse said. (Note that the matador aims to kill the bull in one sword-stroke to the aorta, and repeated attempts to kill the bull will lower the matador's score, according to Aficionados International.)

An even better performance means the matador takes home two ears, then two ears and a tail. A matador might say, for example, "I cut an ear in Seville," DeSuisse said. When a bull is pardoned, which is a great honor for a bullfighter — "the greatest day for you as a matador," DeSuisse said — the matador is presented with a pair of symbolic ears and a symbolic tail, DeSuisse said.

The horns might go toward "artisanal products," DeSuisse said. They might also be used in training. When a matador is learning, he will practice with a person who impersonates the bull. It's "much nicer to do that if [the bull stand-in] can hold a set of horns," he added.

Regardless of whether the bull enters the ring, it will die (except in the case of a pardon), and its meat will be sold. Animal-rights activists protest what they consider to be the brutal spectacle and cruel nature of the bull's death, as a crowd of thousands did in Madrid on Sept. 10, 2016 — an event widely reported. Some argue that the life of a fighting bull has advantages over that of a cow or steer raised expressly for beef production.

"For 15 minutes, they undeniably suffer the stress of combat; for the rest of the time, they and the rest of their breed are able to enjoy all the pleasures and privileges possible for cattle, roaming in their natural environment among the acorn trees of the dehesa [pasture], and eating their preferred foods," veterinarian Yubero told The Guardian's Thompson in 2014.