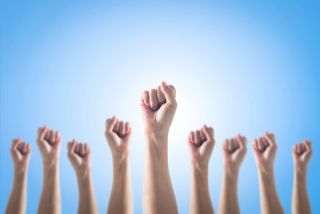 At first glance, the underside of a human arm may look hairless. But a closer inspection will reveal that tiny, colorless hairs cover it like soft peach fuzz.

That's because modern human beings (Homo sapiens) are covered with hair — it's just difficult to see, said Yana Kamberov, an assistant professor of genetics at the University of Pennsylvania.

"We are actually very hairy," Kamberov told Live Science. For instance, our foreheads, ears and, yes, even the undersides of our arms, are covered with tiny hairs called vellus hairs, she said. The only places without hair on the outer human body are the palms, soles of the feet, lips and nipples, Kamberov said. [Why Does Hair Turn Gray?]

Essentially, humans are just as hairy as chimpanzees, according to research comparing hair density between the two species, she said. But whereas chimps are covered with scruffy, black hair that's easy to see, most human hair is less visible because it's minuscule and colorless.

About 2 million years ago, an adaptation led the genus Homo to miniaturize its body hair, Kamberov said. In addition, Homo underwent an adaptation that increased its number of eccrine sweat glands — the glands that most mammals have only on their palms and the soles of their feet.

"The density of those glands exploded, so if you look at the relative density of these glands in a human and a chimpanzee and a macaque, our density is much higher than what you would expect for a primate of our body size," Kamberov said.

These adaptations helped the Homo genus become exceptional long-distance runners, Kamberov said. Most animals need to take breaks during long runs to cool off by panting, Kamberov said. A horse, for instance, can't pant when it's galloping, according to Slate. In contrast, humans can run long distances, even marathons, without having to stop, because we can cool off by sweating with our vast number of eccrine sweat glands.

In addition, if humans had a lot of scruffy hair, as chimps do, the sweat would just coat the hair and not the skin. When most of our body hair is miniaturized, sweat can coat the skin, keeping it cool by making it wet, and then by evaporating off of it, allowing humans to continue walking, trekking or running without overheating, Kamberov said.

That leads to another question, however: Why isn't all of our hair miniaturized peach fuzz?

The answer has to do with puberty, Kamberov said. When humans go through puberty, hormones called androgens trigger some of the tiny vellushairs to "trans-differentiate," or change into terminal hairs that have color, grow longer and cycle, Kamberov said.

It's unclear why some vellus hairs respond to hormones and others don't, she said. The same goes for arm hair — it remains a mystery why the top part of people's arms have terminal hairs and the bottom side does not.

Perhaps those longer hairs are meant to keep the exposed part of the arm warm, Kamberov said.

Another idea is that "it might be an adaptation to minimize friction during arm swing, but that's a wild guess," said Daniel Lieberman, a biological anthropologist at Harvard University.

And still another idea is that the terminal hairs on certain parts of the human body are just leftovers from our long-hair-covered ape ancestors.