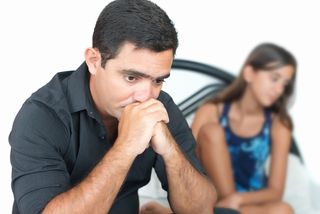 Men who experience excessive anxiety may be at increased risk of dying from cancer, a new study from Europe suggests.

In the study, the researchers analyzed information from more than 15,000 people ages 40 to 79 in the United Kingdom, who were followed for 15 years.

Generalized anxiety disorder is a mental health condition in which people experience excessive and prolonged anxiety or worry, and may also have physical symptoms, such as muscle tension, sleep problems and difficulty concentrating, according to the National Institute of Mental Health. [11 Tips to Lower Stress]

Although more research is needed to confirm the findings, the results raise new questions about the potential health effects of anxiety, said study co-author Olivia Remes, a doctoral candidate at the University of Cambridge.

"With this study, we show that anxiety is more than just a personality trait, but rather, it is a disorder that may be associated with risk of death from conditions such as cancer," Remes said in a statement. "Society may need to consider anxiety as a warning signal for poor health."

The findings held even after the researchers took into account other factors that might affect death from cancer, including age, smoking and drinking habits, and physical activity level, the researchers said.

Still, the researchers noted that their findings do not show that anxiety causes cancer. The study found only an association between the two conditions, and more studies are needed to determine the reasons for the link, the researchers said. It's possible that men with anxiety have other risk factors that increase their chances of developing cancer but that the new study was not able to take into account, Remes said.

More studies are also needed to determine whether anxiety is linked with a higher risk of death for certain types of cancer, and whether treatment for anxiety would reduce the risk of cancer death, the researchers said.

The findings were presented this week at the European College of Neuropsychopharmacology Congress in Vienna. The study has yet to be published in a peer-reviewed science journal.