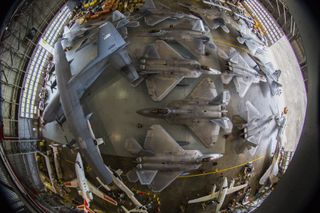 When Tropical Storm Hermine charged up the East Coast of the United States earlier this month, a number of aircraft sought shelter from the powerful winds and drenching rains in a NASA hangar — and a newly released photo shows that the result was akin to a game of aircraft Tetris, with almost 20 different planes squeezed carefully into the cavernous building.

With some maneuvering, the hangar at Langley Research Center was able to accommodate more than a dozen Air Force fighter jets, sandwiched in with a number of other planes, to provide protection from the tropical storm winds.

NASA Langley photographer David Bowman captured the Tetris-like image from the hangar's catwalk some 70 feet (21 meters) above the building's floor.

Normally home to 13 of NASA's own research aircraft, the hangar shares space with neighboring Langley Air Force Base during emergencies, because the facility is rated to withstand at least a Category 2 hurricane, according to NASA.

As weather conditions worsened, Langley Air Force Base reached out to hangar manager Dale Bowser to see if there was space for a few F-22 Raptors ― stealth tactical fighter jets ― to ride out the storm.

Tropical Storm Hermine moved up the Atlantic Coast over the course of about a week, starting at the end of August. After hitting Florida as a hurricane on Sept. 2, Hermine was downgraded to a tropical storm as it churned along the Eastern Seaboard. Though the storm stayed just far enough offshore to avoid causing major damage, rain and strong winds were felt throughout the East Coast.

Built in the early 1950s, the hangar at Langley Research Center was designed to fit a B-36 — a strategic bomber, known as the "Peacemaker," used by the Air Force. The hangar can also accommodate the Super Guppy, a wide-bodied cargo aircraft, which visited Langley in 2014.