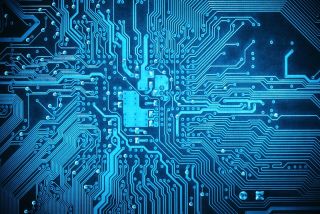 A gel-like material that can carry out pattern recognition could be a major step toward "materials that compute," with possible applications for "smart" clothing or sensing skins for robots, according to a new study.

Recent advances in both materials and computer science have prompted researchers to look beyond standard silicon-based electronics and exploit the inherent properties of materials to create systems where the material itself is the computer.

Now, a team from the University of Pittsburgh has designed a material that can solve pattern-recognition problems using changes in the oscillations of a chemically powered gel that pulsates like a heart. [Bionic Humans: Top 10 Technologies]

The field of materials that compute is brand new but could have numerous applications in "human- centric" computing, said study leader Anna Balazs, a professor of chemical engineering at the University of Pittsburgh.

"People are trying to move away from the traditional hard components that go into computers and make them more out of soft, compliant materials," Balazs told Live Science. "We're trying to move in the direction of computers that people can wear or interact with that don't need large amounts of electronics, that are flexible, that are pressure sensitive so they can gauge changes in our behavior."

At present, the material, described in a study published today (Sept. 2) in the journal Science Advances, is only theoretical. The design was created using theoretical and computational modeling and the team has not actually built it, though they say it would be feasible with state-of-the-art manufacturing techniques.

But Balazs says the research has established key design rules for the field. The material's properties also mean that patterns that need to be analyzed can be input via pressure, chemical stimulation or even light, lending it to numerous potential applications.

These could include shoe insoles that can detect if a user's gait changes, which can be an early sign of Alzheimer's, Balazs said. The material could also be used to develop skin for a robotic arm that can sense different patterns of touch, according to the researchers.

"The hope is it will complete part of the computing as the sensor itself so you don't need extra processors," said Yan Fang, a computer science doctoral student who is the lead author of the new study.

The material's oscillations are due to chemical reactions inside the gel that cause it to continually expand and contract when certain chemical reagents are present. These pulses cause a piezoelectric beam lying across the gel to bend and generate a voltage. Piezoelectric materials generate electricity in response to mechanical stress.

When multiple units of this material are wired up, these electrical signals allow them to communicate and synchronize their oscillations. This allows these networks to carry out so-called "oscillator-based computing," which operates more like the human brain than traditional computers, and is good at perceptual tasks like pattern recognition, the researchers said. [Top 10 Inventions that Changed the World]

To test the material's capabilities, the researchers created three networks and encoded patterns representing pixelated images of the numbers 1, 2 and 3 into them. By switching the way the units are connected, the scientists can assign a voltage of +1 or -1, with the former representing a white pixel and the latter a black pixel.

When a pattern representing a distorted number 1 is introduced to these networks, they gradually synchronize their oscillations and transform the input pattern into the stored pattern, the researchers said.

How quickly this happens depends on how similar the input is to the stored one so the network storing the image of number 1 transforms quicker. Balazs said this means a system consisting of multiple networks can recognize patterns by detecting which one transforms fastest.

Nikolaus Correll, an assistant professor of computer science at the University of Colorado, who was not involved with the new study but who also works with materials that compute, said these systems are common in the human body. For example, the retina, a light-sensitive membrane at the back of the human eye, carries out computations to compress information before sending it to the brain.

"The computation presented in the Balasz paper goes beyond simple signal processing, but implements actual classification," Correll told Live Science. "In the biological systems above this is done in the brain, but why not create artificial systems that perform basic classification right where the information occurs?"

Frank Hoppensteadt, a professor emeritus of mathematics at New York University, who was also not involved with the new study but helped develop the concept of oscillator-based computing, said the new research combining his ideas with oscillating materials seemed to be a natural evolution.

"Our brains are based on chemical/electromagnetic oscillations and people have been figuring out how brains perform computation and control tasks," he said. "Our brains have lots of oscillators — neurons — that operate mostly at frequencies of 0 to 100 Hz. Yet, a brain performs amazing computations such as control of movement, anticipation, and pattern recognition that challenge or exceed the performance of digital machines that operate at frequencies of GHz."