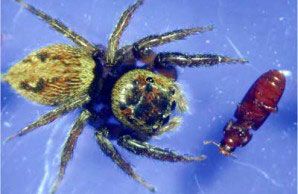 Some beetles play possum, and for the same reason that possums do: to avoid attention from predators. A new study highlights the reason for the trick's success—it works by sacrificing the neighbors.

To figure out exactly why the tactic succeeds, Miyatake and three colleagues bred one beetle strain that feigns death for about twenty minutes and one that doesn't do it at all. Then they studied interactions between spiders and beetles of both strains.

Spiders prefer living prey, so they were less likely to devour beetles that feigned death after an attack, the researchers found. That was especially true if alternative prey was available. Spiders ate death-feigning beetles 38 percent of the time when the beetles were alone, but if the spider had a choice between a death-feigner and a nonfeigner, it bagged the nonfeigner almost every time. The results were comparable when spiders had a choice of death-feigning red flour beetles and nonfeigning beetles of a different species.

The researchers conclude that tonically immobile beetles enjoy improved odds of survival, especially when in the company of more mobile compatriots.

The findings were detailed in the journal Proceedings of the Royal Society B.