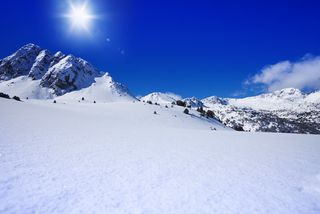 In early July at the Boreal Mountain Resort, temperatures reached 91 degrees Fahrenheit (33 degrees Celsius), which is not uncharacteristically hot in California at the crest of the Sierra Nevada mountain range. The real surprise was that the ski area near Lake Tahoe was making snow.

Boreal is the site of the first North American demonstration of a relatively new technology called Snowfactory. The process parallels that of an industrial icemaker — essentially, a large-scale version of the icemaker in the door of many household refrigerators.

An icemaker takes water chilled with a heat exchanger and sprays it onto a surface. The cubes are created by imposing the ice onto a grid. In a unit about the size of a trailer, such as the type pulled by 18-wheeler trucks, Snowfactory uses the same process to produce flat flakes that are collected on a panel and fed into a conveyor belt. The flakes are then blown through a pipe up to 600 feet (183 meters) long to the desired location on the ski slope. [Photos: The 8 Coldest Places on Earth]

While this may not be considered "real snow," it does provide a sliding surface suitable for skis and snowboards. And this is why Boreal Mountain Resort is taking the technology for its first swoosh in North America. In fact, the man-made snow enabled the resort to host a summer ski and snowboard camp that lasted through Aug. 8.

Snowfactory has been used in Europe to make early-season snow for Nordic ski courses. It's also being considered for a winter Nordic ski course in New York City's Central Park. But this is the first test of the technology in summer, said Robin Smith, who directs strategy and business development in North America for the TechnoAlpin, the Italian company developing Snowfactory.

Why not just use a conventional snowmaker? Because you can't. Conventional snowmaking used by ski resorts requires a temperature of about 28 degrees Fahrenheit (minus 2 degrees Celsius), although in rare circumstances, snow has been made at temperatures above freezing. With Snowfactory, there is no absolute limit on the temperature threshold, says Smith. As the tests at Boreal proved, snow can be made even at the sweltering 91 degrees Fahrenheit. The question is how long it will last.

This new form of manufactured snow, because of the absence of air, melts much slower compared with artificial snow made from conventional snowmakers.

"Natural snow, when the sun hits it, melts very quickly," Smith told Live Science. "Machine-made snow is much more dense and it lasts 10 times longer than natural snow. What comes out of Snowfactory is even more durable yet, maybe by a factor of two to three." [Top 10 Inventions that Changed the World]

But will it survive in 91-degree temperatures? Probably not very well, he said. "If it's 91 [degrees] all he time, the shelf life isn't worth it."

But the snow will likely survive much more readily in the 75 to 80 degrees Fahrenheit (24 to 27 degrees Celsius) conditions that are more customary at Boreal.

Still, these attempts to simulate January in July come at a cost. Snowfactory-produced snow requires the same amount of energy as four conventional snow guns. Because of that increased cost, TechnoAlpin doesn't think the technology is a practical solution for all seasons everywhere. But in limited circumstances, such as high-dollar ski and snowboard camps, or maybe during warm winters in New York City, this expensive new technology might find a sweet spot.