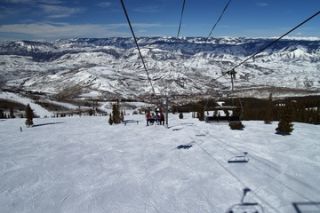 Using reclaimed wastewater to save energy and ease water shortages is often promoted as a green idea. But sometimes the results come out looking yellow instead.

An Arizona ski resort recently tried to do the eco-sensitive thing by using reclaimed wastewater for snowmaking, the New York Times reports. But for reasons that may seem obvious to some, the snow has a disturbing yellowish tint to it.

The manager of the Arizona Snowbowl resort in northern Arizona claims the color is the result of rusty residue in the snowmaking equipment. However, not everyone's buying it: "I question whether that explanation is based on tests of the water or conjecture," Taylor McKinnon of the Center for Biological Diversity in Tucson told the Times.

Naturally, bloggers are finding the incident is pure comic gold: "If you’re going to open a ski resort and cover the slopes with snow made from human pee, you probably shouldn’t call it 'the Snowbowl,'" said Kelly Kazek of Alabama Live. "I'm just sayin'."

The use of reclaimed sewage continues to be a controversial issue as it's implemented in many regions. In California, treated wastewater is added to groundwater supplies in Los Angeles and Orange County.

Even though critics raise a stink every time the issue is discussed, their objections are largely emotional, according to psychologists. The concept of "magical contagion" leads humans to believe that when two objects come into contact, they continue to affect each other even though there's no real contagion or other influence.

To test this concept, a 2011 study asked participants if they would willingly drink recycled wastewater. Among those who were unwilling or uncertain, no amount of treatment or purification would change their minds — unless the water was served from a bottle or out of a tap.

"Some people just want [their water] to be certified safe; they don't want to know the details," said Carol Nemeroff, professor of social and behavioral sciences at the University of Southern Maine, who led the study.