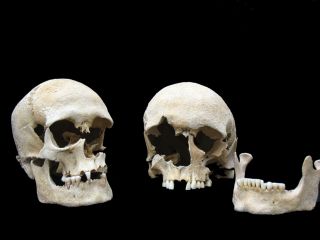 Plague bacteria was extracted from the skull on the right.
(Image: © State Collection of Anthropology and Palaeoanatomy Munich)

With a single tooth from an ancient human skeleton found in Germany, scientists have now created the most complete genetic picture yet of the bacteria that caused the world's first plague pandemic.

The Justinianic Plague killed 50 million people from the sixth to eighth centuries, and was caused by the same species of bacteria, Yersinia pestis, as the Black Death, which struck Europe during the Middle Ages.

The new genetic analysis reveals that three of the genes of this bacteria likely contributed more to the spread of the plague than previously thought. In addition, the researchers found mutations that were unique to the strain of Yersinia pestis that caused the Justinianic Plague.

The new study also confirms some findings from an earlier study, published in 2014, that involved a genetic analysis of a different human skeleton that dated to about the same time as the skeleton in the new study, the start of the sixth century. [5 Scariest Disease Outbreaks of the Past Century]

"We now have a complete Justinianic re-constructed genome, as opposed to the partial draft genome that was published in 2014," Michal Feldman, the lead author of the new study and a researcher at the Max Planck Institutes in Germany, told Live Science in an email.

That earlier study was led by David Wagner, an ecologist at Northern Arizona University. The new findings are "a validation of what we found previously with a different sample, which is exciting," Wagner told Live Science.

In the new study, the researchers looked at plague DNA found in a skeleton buried in Altenerding, near Munich, just 12 miles (20 kilometers) from the site where the skeleton analyzed in the 2014 study was buried.

The new study revealed mutations in three genes — named nrdE, fadJ and pcp — which the researchers said are associated with plague virulence. However, Wagner noted he was skeptical of this conclusion. "There's not a lot of background to suggest these things are associated with virulence," he said.

But the new evidence confirms the conclusions of the previous work, he said, that the strain of the bacteria that caused the Justinianic Plague is part of a lineage that can be traced back to China.

"More high-quality genomes from different locations and time periods could shed light on the disease transmission routes and the rate that it spread," Feldman said.

The research was published today (Aug. 30) in the journal Molecular Biology and Evolution.