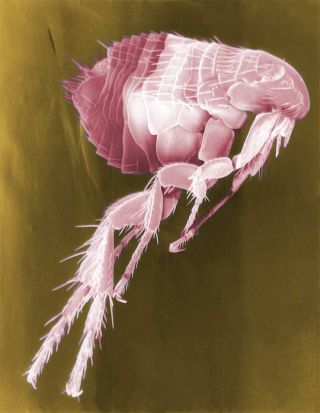 Plague is caused by a bacterium carried by plague.
(Image: © Janice Haney Carr)

Many centuries before the Black Death wiped out a third to half of Europe, an equally virulent pandemic called the Plague of Justinian killed upwards of 100 million people in just two short years between 541 and 543 A.D.

Scientists have long debated the connection between what have been called the two most deadly plagues to wreak havoc on humankind. Now, an international team of researchers analyzing the remains of two people killed by the Plague of Justinian has concluded that the pandemics arose from two distinct strains of the bacterium Yersinia pestis.

The strain that caused the Plague of Justinian likely went extinct long before the emergence of the Black Death in the 14th century.

This is actually disturbing news for people today, the researchers said. Their findings imply that if such horrible strains of plague bacteria arose twice before, independently, there's no reason why another strain can't arise tomorrow … lurking today in the gut of a flea nesting in the fur of a rat.

The bacterium that causes the bubonic plague, Yersinia pestis, resides in the intestines of certain fleas that feed on rodents. A bite from an infected flea can spread the disease to humans. [6 Superbugs to Watch Out For]

"Plague remains a real threat in some places of the world, like Madagascar, which has more human plague cases than any other country — hundreds to over a thousand cases a year," said Dr. Dave Wagner, co-first-author on the study and an associate professor in the Center for Microbial Genetics and Genomics at Northern Arizona University.

Even the United States sees an average of seven bubonic plague infections yearly, from a strain introduced to California from China about 100 years ago.

Bubonic plague is curable with antibiotics if treated within a few days after infection. This and the fact that most people in wealthier countries don't live in close proximately to flea-carrying rodents — unlike the situation in medieval Europe and Asia — means that the chances of a plague pandemic are unlikely.

"The main reason why there are a lot of plague cases in Madagascar is because they have large populations of non-native rats, which are good hosts for plague," Wagner told LiveScience. In the United States, the hosts often are other kinds of rodents, such as prairie dogs.

Previously, Wagner worked on the research team that established that the Plague of Justinian was indeed a bubonic plague caused by Yersinia pestis, settling a long-standing debate. They made this conclusion through DNA analysis of two victims of that plague.

The new study probed deeper and compared this unearthed Justinian bacterial strain to the well-studied Black Death strain. The researchers isolated miniscule DNA fragments from the teeth of those same two victims, both buried in Bavaria, Germany. (This feat itself resulted in obtaining the oldest known human pathogen genome.)

Using these DNA fragments, the researchers reconstructed the Yersinia pestis genome and compared it to a database of genomes from more than one hundred contemporary strains. The scientists found that this more ancient strain was an evolutionary "dead end," distinct from strains involved in the Black Death and subsequent outbreaks.

In fact, the third and most recent bubonic plague pandemic, which originated in Hong Kong around 1850 and killed millions, stems from the very same Black Death plague that decimated Europe, the researchers found. In other words, the ancient strain was gone, and only the Black Death strain remained to cause the 1850 pandemic.

"[This] research is both fascinating and perplexing, [and] it generates new questions, which need to be explored," said Dr. Hendrik Poinar, the senior author on the study and the director of the McMaster Ancient DNA Centre at McMaster University in Hamilton, Ontario. "For example, why did this [Justinian] pandemic, which killed somewhere between 50 and 100 million people, die out?"

Poinar said he hopes the study of ancient genomes can answer such questions, thereby helping prevent such pandemics today.

The researchers also determined that the Justinian strain likely originated in Asia, though some have speculated it started in Africa. But the scientists don't know when. Earlier epidemics, such as the Plague of Athens (circa 430 B.C.) and the Antonine Plague (circa 165 A.D.), could also be independent emergences of particularly virulent Yersinia pestis strains.

Doctors warn that pandemics can take many forms and remain a constant threat in this world of rapid global transportation and migration. The last great pandemic was the 1918 flu pandemic, which infected 500 million people and killed at least 75 million. The HIV/AIDS pandemic has taken approximately 30 million human lives since 1980.

The bubonic plagues, however, were extreme in killing such a high percentage of the European population — indeed, arguably, the cause of societal changes that ended the classical era of antiquity and then, 800 years later, gave birth to the Renaissance.