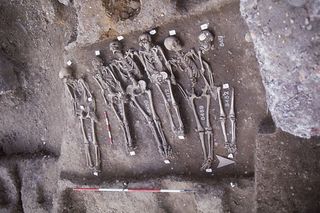 Dental pulp taken from Black Death victims, like these, excavated from the East Smithfield cemetery in London, allowed scientists to sequence the genome of the bacterium that is believed to have killed them about 660 years ago.
(Image: © Museum of London)

The bacterium blamed for the Black Death that wiped out more than a third of Europe's population within about five years of the 14th century looks an awful lot like the modern versions of the plague-causing bug, new genetic research indicates.

By taking the now-powdery black pulp out of the teeth of plague victims buried in London's East Smithfield Cemetery — a cemetery established solely to handle the onslaught of the Black Death once it arrived in the city in 1348 — researchers have managed to reconstruct the entire genetic blueprint, or genome, of the bacterium blamed for the devastation.

Since science already have the same information for modern strains of plague bacteria, this gave the researchers the chance to explore perplexing questions about plague. [Pictures of A Killer: A Plague Gallery]

In fact, all modern, human-infecting strains appear to have separated from a common ancestor shortly before the Black Death, making the medieval bacterium the grandmother of modern plague, as one of the researchers said.

Still, the genetic similarity between bacteria leaves the big question: Why does modern plague, while deadly without antibiotics, pale in comparison to the devastation and wildfire-like spread of the Black Death?

Since genetic changes don't appearto explain this change in behavior, the researchers suggest an alternative: The 14th-century bug hit at a time when Europeans were already down. They were living in a cold, wet period that caused crops to fail, and they were most likely already struggling with other diseases. [See video here]

Analyzing ancient DNA from a disease-causing bacterium is difficult. Not only is it present in miniscule amounts of tiny fragments, but the sequence degrades over time. And samples also contain sequences from the human victims as well as other things living in the grave's surrounding dirt, including soil bacterium. And they must avoid introducing modern contamination.

To decode the medieval genome, the researchers synthesized modern DNA that matched up with the tiny segments of the medieval bacterial DNA from the teeth. After fishing out these medieval segments, they pieced them together.

When they compared the different genomes — from the Black Death, modern plague, and that of Yersinia pseudotuberculosis from which all plague evolved long ago — they found no unique mutations in the medieval genome. All the differences matched up either to those of modern strains or to the soil bacterium that is the ancestor of all plague bacteria.

"Even a mother and child show more differences than ancient Black Death and modern Black Death," said study researcher Johannes Krause of the University of Tübingen in southern Germany.

This doesn't fit well with earlier work published this September in the journal the Proceedings of the National Academy of Sciences by many of the same researchers, who reported unique mutations in the medieval DNA. However, that was a limited study; they had yet to sequence the entire Black Death genome. These changes did not show up in the more-recent work and were likely the results of damage to the DNA sequence, a problem the researchers corrected for this time, according to Krause.

In the more recent paper, Krause and the others constructed a family tree based on variations seen in the medieval bacteria and many modern ones, and placed the medieval sequences nearly at the root of the tree. They also calculated that all human-plague causing bacteria diverged from a common ancestor between 1282 and 1343, making the Black Death, which arrived in Europe in 1347, the original plague pandemic.

"It is basically the grandmother of them all," Krause wrote in an email.

But plague has been blamed for previous devastation, including the Justinian Plague, which afflicted the Eastern Roman Empire between A.D. 541 and 750. It's possible the Justinian Plague was caused by a variant of Y. pestis quite different from all current strains or by another disease altogether, the researchers write in the Oct. 13 issue of the journal Nature.

Earlier work, done using markers called single nucleotide polymorphisms from modern plague strains, created a comprehensive family tree for the plague bacteria and put its origin back in China 2,600 years ago. However, this doesn't contradict the latest results, according to researcher Mark Eppinger, who helped create this global family tree.

It's conceivable that a version of the bacterium capable of infecting humans emerged more than 2 millennia ago in or around China and traveled great distances, causing some cases without exploding into a pandemic until the 14th century, according to Eppinger.

"There is always some uncertainty in the calculations because evolution is not constant, there might be spikes in evolution during a human (plague) outbreak and other periods in time when plague resides at a lower evolutionary rate in its natural rodent host population," said Eppinger, who is a researcher at the Institute for Genomic Sciences at the University of Maryland School of Medicine. [10 Deadly Diseases That Hopped Across Species]

This newly sequenced genome will allow scientists to study the evolution of the plague bacteria by looking at the ancient killer itself. All studies of the Black Death have had to rely on snippets of ancient DNA and modern strains no more than a few decades old, Eppinger said. "But this time, it is really the blueprint of the ancestral genome that is actually responsible for the deaths of people back then," he said.

The similarities found between the modern strains and those in the plague victims bring up a long-standing question about the medieval epidemic: Why did it spread so much more rapidly and cause so much more devastation than the version we have known since Y. pestis was identified in 1894?

It's not possible to dismiss some kind of decrease in virulence since then. "However, there is no smoking gun, so to speak," said study researcher Hendrik Poinar, an evolutionary geneticist at McMaster University in Ontario, Canada. [Read: How the Black Death Changed the World]

Instead, the team proposes that circumstances played out just right to allow the disease to explode through the population. The genetic data indicate that Europeans had never encountered it before, so they had no immunological or behavioral adaptations (such as quarantine). Tree-ring data indicates the beginning of a cold, wet period, which would have hurt food supplies, Poinar said during a press conference Tuesday (Oct. 11). A hungry population would be more vulnerable to illness.

The discrepancies between modern plague and the Black Death have led some to suggest that other pathogens were responsible, including an Ebola-like hemorrhagic virus. While there is no physical evidence so far of another pathogen, it's possible that just such a virus joined forces with Y. pestis to decimate medieval Europe, according to Sharon DeWitte, one of the researchers and an assistant professor of anthropology at the University of South Carolina.

But if the medieval plague were to return, don’t worry: Modern antibiotics, like tetracyclines, would be effective against it, Poinar said.