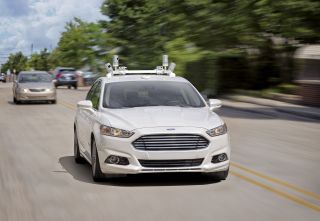 An autonomous research vehicle on the streets of Dearborn, MI.
(Image: © Ford)

Automaker Ford announced today that it plans to develop fully autonomous vehicles by 2021. The company is aiming to offer these self-driving cars to ride-sharing or ride-hailing services, according to Ford officials.

"It's now clear that the next decade is going to be defined by the automation of the automobile," Ford CEO Mark Fields said in a statement broadcast onlineTuesday (Aug. 16). "We see autonomous vehicles as having as significant an impact on society as Ford's moving assembly line did over a hundred years ago."

Ford said it intends to have a "fully autonomous SAE level 4-capable vehicle" in commercial operation in five years. [Photos: The Robotic Evolution of Self-Driving Cars]

A level 4-capable autonomous vehicle, as defined by SAE International, a professional organization for engineers, puts all driving functions in the hands of a machine with no fallback option for a human driver. Functions like steering, navigation and road awareness would be fully automated, but in contrast to a fully automated level 5, a level 4-capable vehicle might not be able to handle every situation or "driving mode."

"Where we see the greatest opportunity, is where we're able to remove the driver from the responsibility of driving altogether," Ford CTO Raj Nair said in a statement.

Ford's self-driving vehicle will have no steering wheel, gas pedal or brake pedal to allow a human driver to take control in a recreational environment or emergency situation. Ford executives discussed driverless technology as an accessibility issue, both physically and financially. Machine-driven ride services could provide mobility to people unable to drive themselves and afford a private vehicle of their own.

As part of this effort, Ford will double the personnel at its Silicon Valley offices, the company said. Ford also announced investments in technology companies that specialize in light sensors, machine learning, artificial vision intelligence and high-resolution maps.

Today's announcement follows an agreement between rival auto company General Motors and the ride-hailing service Lyft to test self-driving electric cars within the next year, reported the Wall Street Journal.